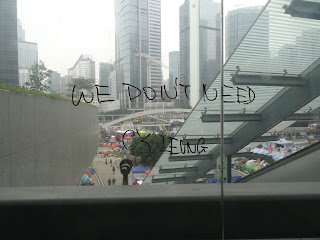 Seen at Occupy Admiralty in December 2014 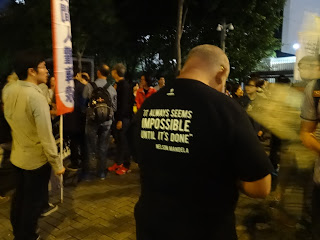 Seen at a protest rally last month
"Leung Chun Ying, ha toi (step down)!"  One of the most chanted phrases on July 1st and other days of protest looks like it'll be retired soon in view of this afternoon's unexpected announcement by 689 that he'll not be seeking a second term as Chief Executive of the Hong Kong Special Administrative Region in 2017.

The official line is that Hong Kong's current super unpopular Chief Executive has opted not to seek reelection for the sake of his family.  And there may indeed be some truth in that; what with news filtering out that his often strange-acting second daughter, Leung Chai Yan, has been in hospital for the past month.
At the same time though, I definitely recall discussions with people at Occupy Admiralty and elsewhere during which suggestions would be made that even while Beijing wouldn't want to lose face by admitting that CY Leung had been the wrong choice to be Hong Kong's third Chief Executive, the possibility existed that 689 would announce later down the road, like his predecessor Tung Chee Wah, that he'd not seek re-election for such as health or family reasons -- when, in reality, it had been decided from above/up north that a different person needed to be in charge for things to get better, including relations between Hong Kong and Mainland China.
Those who believed in this possibility often were divided between those who believed that Beijing would opt for an alternative who genuinely would do better by Hong Kong (in part because a more stable Hong Kong will be less trouble for China) and those who think that Beijing will favor someone who will be even more hardline -- and even more loyal to Beijing -- than 689 (because it believes the stick works far better than the carrot).  Consequently, even while some people (particularly the ABCs (Anybody But CY) brigade) are ecstatic over today's developments, others are cautious, even fearful.
For my part, the news makes me happy because I actually feel that it's one positive -- even if delayed -- outcome of the Umbrella Movement (which I honestly don't feel was in vain and also feel is still ongoing).  At the same time, I'd agree with those pro-democracy activists and supporters who maintain that that we should not let down our guard and that there's still much fighting to be done for a better Hong Kong (and a Hong Kong government that genuinely cares for Hong Kong and Hong Kongers).
After all, in discussions as to why we want genuine universal suffrage and a real choice that involves being able to vote for candidates that Beijing hasn't screened and selected, nightmare scenarios involved the 2017 Chief Executive election candidates ending up including the likes of Regina Ip and Starry Lee -- and it remains a genuine possibility that those two pro-Beijingers will seriously be in the running to succeed 689.  Alternatively put: the possibility remains that Hong Kong will actually have a Chief Executive after Leung Chun Ying who could actually be worse than him!
To try to prevent that from happening, we must continue to battle on and make our voices heard -- at protest rallies and marches, if not through votes cast at those elections where we are eligible to cast votes.  And talking to and generally trying to open the eyes of those of our fellow Hong Kongers who have not yet awakened or were too easily disillusioned when immediate results weren't achieved during and in the immediate wake of Occupy Hong Kong shouldn't hurt either, I reckon!
Posted by YTSL at 11:52 PM