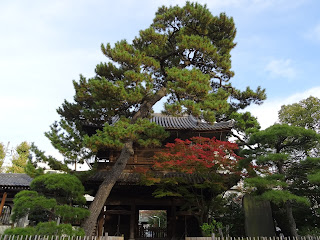 Sengakuji is home to some beautiful trees and buildings 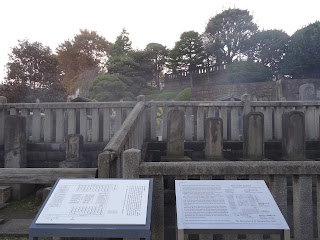 But its main draw is actually its graveyard 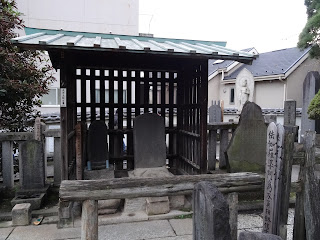 In particular, there are many visitors to this day to the section
of the temple grounds where the final resting places of
loyal samurai, their master and his wife are found

Around this time three years ago, a movie entitled 47 Ronin was given an international release (and even had its world premiere in Japan -- where the eventual box office bomb's story was set -- rather than the USA).  I must admit to being shocked, even horrified, that Hollywood had had the audacity to effectively mess with the true story of the faithful retainers of a feudal lord forced to kill himself after assaulting an arrogant court official who had repeatedly belittled him, who proceed to seek revenge for their master by taking the life of the troublemaking court official; and this especially after great cinematic works about what's also known as the Ako Incident already had been made decades previously by master auteur Kenji Mizoguchi.

One December morning in 1702, a group of ronin led by Oishi Kuranosuke attacked the household of court official Kira Yoshinaka.  After killing the man they held responsible for their late master's death (and disgrace), they carried Kira's severed head several miles to Sengakuji, where their late lord -- Asano Naganori, the daimyo of the Ako domain -- had been laid to rest after his court-ordered suicide.  Upon making this presentation at Asano's grave, the samurai then sat and waited to be arrested for the authorities.

Since they had gone against the law in killing a court official, these 46 "masterless samurai" were themselves sentenced to death by seppuku; with the 47th ronin involved in this revenge plot escaping this sentencing, it is said, on account of his age (as well as because he had been selected to go to Ako to tell the tale of his comrades rather than go along with them to effect the act they all had sworn to do).  Considering that among those sentenced to commit ritual suicide was Oishi's 16-year-old son, that one surviving member of the party must have been pretty young indeed -- or if he was adjudged to be too old to be sentenced to death, then he must have been over 77 years of age as that was how one of the other 46 ronin had been!

After their deaths, the 46 loyal ronin who committed seppuku were laid to rest in the same cemetery as their late master (whose wife also was buried near him after her death).  And over the years and centuries, many people have gone to their final resting places over at Sengakuji to pay their respects to these honorable men as their deeds have come to be looked upon as exemplifying admirable loyalty, justice and chivalry.

When I visited Sengakuji, I found the temple grounds to be peaceful and serene.  While there were other visitors about, the mood was solemn and respectful.  And although there's a museum attached to the temple, it feels far less commercializing than educative and effective in humanizing the 47 men (and boys) who had sought to avenge their lord -- by doing such as exhibiting personal effects that had belonged to them and figurines bearing their likenesses, and also providing the names, ages, regular positions (including accountant, lord chamberlain and quartermaster, not just more expected ones like guard) and other details about each and everyone of them.

Close to the entrance to the graveyard is a place where one can buy sticks of incense to place before the graves.  It's a respectful gesture, and many visitors do go ahead and perform this ritual.  It can be attributed to the smoke from the burning incense but I don't think it's just that which makes your eyes water when you go about paying your respects to the fallen samurai, their master, and his wife.  For even if you don't think what they did all those years ago was absolutely the right thing, as you pause and place incense sticks at each and every one of those 46 ronins' graves, it will be hard to not realize that each and everyone of these marks the final resting place of people willing to die for what they believed in -- and who once used to be living, breathing human beings like you and me.
Posted by YTSL at 10:58 PM