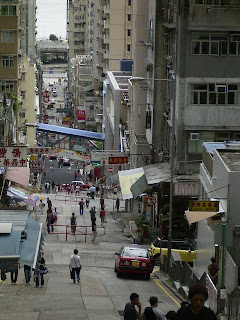 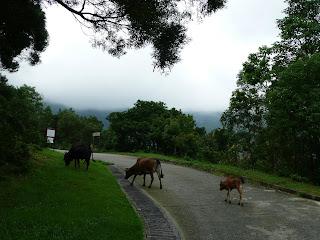 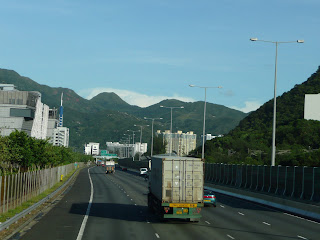 To put it mildly: This week's Photo Hunt was one for which I *wasn't* going to lack photos. For while it's true that Hong Kong only has 2,034 kilometers worth of roads, that's actually a lot for a territory that totals just 1,104 square kilometers in size -- and even more so when one considers that only 25% of that land has been developed, with some 40% of that total being officially designated country parks and nature reserves.

In continuing my efforts to try to show people different sides of Asia's World City, I've selected three photos that I hope you'll agree don't present the usual views that one gets of Hong Kong, its roads and all. Individually, they also respectively represent: town (albeit an older, more hilly part that tends to be off the tourist path); country (Who would have thought it? Cows in Hongkers!); and being out and about (since I took it while on a bus heading back into the city proper after a day of further exploring in the New Territories). :)

That's a variety of roads, people, vehicle and even cows, lol !

Hold your tracks!!!
Allow the cows to cross the roads.. LOL
Happy Weekend:)

You're very good at statistic ;).
Nice shot for the theme and happy weekend

Your photos are fantastic! Well done for this week!

Variety was indeed what I had in mind! :)

Happy weekend to you too! :)

Nah, on the contrary, I think I'm not very good at numbers at all! ;D

Thanks for the kudos! :)

I think it is great that you show the various sides of Hong Kong.

Thanks for your visit on my blog. I like that photo with the cows, where's that?

Oh, I'm glad to see another photo hunter in HK too... we have a nice weather today, happy weekend!

Mine's shared...all about the "Devil" this week. Come see. Have a great weekend, and happy hunting!

Three very different photos. I love the way you've shown such varied scenes. My particular favourite is the one with the cows!

To answer your question on mine - it was morning, but a low sun and the thick leaf-cover made that area dim and mysterious.

Those photos were really good to show the variety of life there. I would have only imagined the first photo really so thanks!

Great photos! I especially love the second one, with the cows in order!:)

i always feel satisfied when i come over to yr blog. but i guess it must put some pressure on u to have all these pics ready. :) is not that u have traveled far or stuff is jus tat u have an eye for a pic opportunity

Those are all great shots. I love how you showed us the different scenes. Fun to see animals on the road, unless you're in a big hurry. Happy weekend.

Those are great photos of roads. Nice to see such a variety too.

Interesting photos - thanks for that perspective. We are quite acustomed to cows in the road here. =)

Thanks for stopping to travel down Pollywog Creek roads and have a wonderful weekend.

I like the different views, I guess if one go far enough away from the city, there were be roads untouched by the city

Thanks for appreciating my efforts! :)

The photo with the cows was taken just east of Chuen Lung, near the western end of the Lung Mun Country Trail.

And it was too hot today for my liking but I did appreciate the beautiful blue skies! :)

Thanks and yep, your entry this week *is* on the devil-ish side! ;b

The cows do seem to be quite the favorite! ;b

Thanks for appreciating and visiting! (BTW, you're not a Photo Hunter, are you? If you are, sorry but I couldn't find your entry!)

Generally don't feel that much pressure: it depends on the theme! Anyways, Photo Hunt gives me a way to use/show many of the photos I've taken but didn't quite know an occasion to put up, so it's generally to the good. :)

Cows I don't mind seeing on the road. Animals like snakes OTOH... ;S

Have to admit that cows are not particularly common sights in most of Hong Kong... ;b

Exactly -- re your latter comments! :)

this is very informative and how i love the road with the cows!

i never thought Hongkong has such roads and sceneries. all my life, it think of it as a commercial place.

Hong Kong is really crowded as in China mainland.

Interesting post as always YTSL. How lucky you are to have all those parks and nature reserves to escape to from the hurley burley of the rest. Have a good weekend.

those are perfect for the theme...and such a variety of roads and adventures...

Wow, we can also catch some cows crossing roads in Hong Kong? I have quite a hell lot of cows crossing around my housing areas everyday, every time they just left their shits all around the roads.

I love the contrasting roads! It's fun seeing places I've never been. Thanks and have a wonderful weekend, Annie

Pardon my ignorance, but I never thought there'd be "country" in Hong Kong. Great take on the theme today - have a nice weekend. :D

What a variety of road scenes in such a small area. Happy weekend

Did you encounter those cows while you were hiking?

It does again show a different side to Hong Kong. I'm now used to the idea that Hong Kong isn't what I expected but cows! No, I hadn't expected cows :)

Here's mine. Enjoy the rest of your weekend!

That is a nice variety of roads!
Great photos for today.

Haha, the second picture looks like my drive to work.....Unfortunately there isn't a wonderful urban area just 'a stone's throw away'.

Cows in HK? Who would have thought? It is always thought of as cosmo and bustling :)

Hong Kong does have its commercial pockets but, truly, it's not the be all and end all of the place. :)

...which means that both places have vast expanses of countryside along with pockets of immense high density! ;D

Yes, am indeed lucky. Now what I want is for the weather to turn nicer (cooler and dry) so that I can get back to regularly hiking once more! ;S

Glad you can appreciate that! :)

Yes, there are cows in Hong Kong. One particular island, Tap Mun Chau (Grass Island), is INFAMOUS for its cows and cow shit... Have a photo-essay up of that island (and yes, it was hard to avoid taking pictures of the shit around!) ;D

Hear, hear re it being fun to see places I've never been via the Photo Hunt! :)

No need to pardon your ignorance, especially now you've had your view of Hong Kong added to! Seriously though, there are lots of people who have visited Hong Kong who still go away never realizing that it has its countryside(s)... :S

Yeah, the diversity (geographic and otherwise) contained within Hong Kong never ceases to amaze me! :)

Cows in Hong Kong really does seem worth commenting on for a lot of people... ;b

Thanks for appreciating the first photo -- am afraid that the cows in the second photo may have distracted from it for most people. ;)

Wow, you really do live in a rural part of the US! :b

Parts of Hong Kong are indeed cosmopolitan and bustling (e.g., where I work) but... ;b

Great shots for the theme.

Have a good day.

Most definitely am with you in thinking that variety is the spice of life! :)

The first photo, where's that place!? I cannot recall the road name. gosh! I'm getting old!

My own memory's deserting me but it's either Western or Centre Street over in Sai Ying Pun. :b

There seems to be many more hills in SF than the rest of the US. One of the charms of the city. Conversely, traveling out of SF makes me ruminate how flat (and boring) everywhere else (metropolitan) is.

Did you experience Hong Kong's hilly side when here? Hope so! :)