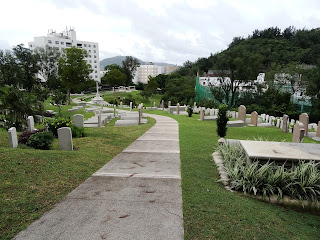 There's much room for remembrance and contemplation
at Stanley Military Cemetery 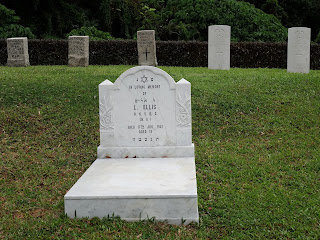 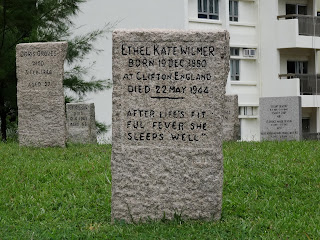 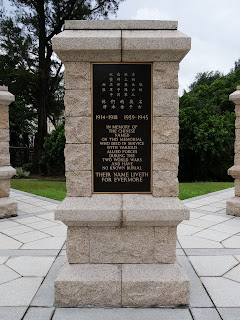 
On a visit to Stanley this past summer, I forewent a visit to more usual destinations such as one of its beaches in favor of a quieter destination which lies close to St. Stephen's Beach and St Stephen's College, an elite secondary school whose alumni includes wing chun master Ip Man.  Although I expected the Stanley Military Cemetery to be over-grown and full of mosquitoes, it turned out to be a well-tended place which felt peaceful, even serene.


Established early on during the colonial British period of Hong Kong's history, the oldest grave at the cemetery dates back to 1843.  Still, in the popular imagination, Stanley Military Cemetery is most associated with the Second World War; and, actually, all of Stanley too since Stanley Fort was where the Allied troops defending Hong Kong against the invading Japanese had their last stand 75 years ago this month, an internment camp (one of whose remaining structures is the School House of St. Stephen's College) was set up there by the Japanese after the Allied forces surrendered over Hong Kong on Christmas Day, 1941, and the nearby college also was where one of a number of atrocities committed by the Imperial Japanese Army took place.

In view of this negative association and the general disinclination of local Hong Kongers to pay visits to cemeteries that aren't home to their ancestors' remains, I wasn't all that surprised to find that the American friend who accompanied me and I were the only people in the grounds when we visited Stanley Military Cemetery that afternoon.  For my part though, I'm glad I went -- as I found the place to be interesting, and the experience of being there actually pretty moving.

Unusually for a military cemetery, the graves of civilian internees who died between 1941 and 1945 and military men (and a few women) are intermingled.  I also found it illustrative -- and here I think of Khazir Khan pointing out at this year's Democratic National Convention that the graves at Arlington National Cemetery aren't only of Christians -- that the graves of non-Christians can be found lying next to those of the Christian faith -- and that there exists a memorial on which is inscribed the names of more than 2,400 Chinese in service with various Allied forces during both the First and Second World Wars, and who have no known graves.

All too often, we tend to fixate on who was the enemy during a war.  I think it actually would be more instructive to consider who one's allies and comrades are during those trying times -- as well as to consider and celebrate how even the worst and most bitter enemies can transform into friends after peace is declared and comes along.
Posted by YTSL at 4:35 PM

This is sad we still hold grudges. This is one thing I have trouble with a lot religious of hate.
Blessing for the holidays and looking forward to 2017

Seasons greetings and happy holidays to you! Here's hoping for more tolerance among different religions, ethnic groups, etc. in 2017 -- and more peace and goodwill towards our fellow humans, period!