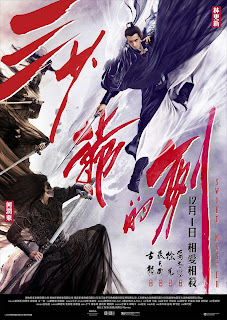 The official poster for Sword Master
(courtesy of Distribution Workshop)

Earlier this week, I viewed a Mainland China-Hong Kong co-production which -- like with Benny Chan's Call of Heroes a few months ago -- felt like a welcome blast from Hong Kong cinema's glorious past.  But whereas that historical actioner which starred Hong Kong actors Lau Ching Wan and Louis Koo alongside Taiwan's Eddie Peng and Mainland China's Wu Jing brought to mind those kinetic Hong Kong action movies with plenty of heart from the 1980s and 1990s, this stunning blockbuster wuxia work feels like the inspired spawn of Tsui Hark at his demented best and a classic Shaw Brothers production.

As it so happens, Sword Master was produced by none other than Master Tsui (who showed with The Taking of Tiger Mountain last year that he's back in gloriously manic form), directed by Shaw Brothers actor turned filmmaker Derek Yee, and co-scripted by the two of them (along with Chun Tin Nam).  Moreover, it actually is a remake of Death Duel, the 1977 Shaw Brothers production in which Derek Yee had top billing among a star-studded cast that included his half-brother David Chiang, Ti Lung, Lo Lieh and Yeh Hua!

Considering this pedigree, it's little coincidence then this film's eye-catching aesthetics look to have been inspired by the Shaw Brothers hyper-theatrical movie sets which prioritized splendour over realism.  Adding to the visual delight is the not at all insignificant matter of Yuen Bun and Dion Lam's inventive action choreography and Chan Wai Lin and Chan Chi Ying's cinematography having successfully combined to make thespians not known for their action prowess look like martial arts masters (like was the case with many a 1990s Tsui Hark wuxia production, including the Ching Siu Tung directed and beautifully action directed Dragon Inn and Swordsman II).

In Sword Master, Lin Gengxin (who had a major part in Tsui Hark's The Taking of Tiger Mountain) has the titular role which had gone to Derek Yee in Death Duel.  Having mastered his powerful clan's sword style at the age of 11 years, the still not that old Third Master of Sword Mansion is close to attaining martial arts supremacy after having vanquishing challengers and family foes galore over the years.  But he has grown tired of all the bloodshed and seeks to not only retire from the martial world but has his death announced and takes on the guise of a lowly servant in a brothel in Bitter Sea Town.

In so doing, Third Master Hsiao Feng -- who takes on the nondescript name of Ah Chi in his new life -- abandoned the woman he was betrothed to, the formidable -- and, in fact, often pretty frightening -- Mu Yung Chiu Ti (Jiang Yiyan).  And without realizing it, he also dashed the hopes of another master swordsman, the eccentric, facial tattooed -- and consequently evil looking -- Yen Shih San (Peter Ho), of engaging him in a duel that would decide who truly was the greatest swordsman alive.

These wuxia stories being what they are, however, you just know that Hsiao Feng's path will cross with Yen Shih San, and again with Mu Yung Chiu Ti; after which much fight action and bloodshed ensues.  Before that, however, Hsiao Feng finds caring friends among the most humble of folk, and even falls in love -- with Li (Jiang Mengjie).  A hard-working prostitute in the brothel, whose impoverished family doesn't realize for the longest time how she's earning the money that they so clearly need, she's worlds apart in status but also temperament from Mu Yung Chiu Ti, whose ambition and nature marks her out pretty much from the start as the story's chief villain(ess).

In what can seem to be another characteristic Tsui Hark touch (but actually goes all the way back to the source material by wuxia novelist Gu Long), Sword Master is a film in which actresses as well as actors have prominent parts.  And while the main roles in this Mandarin-language movie do rather naturally belong to native Mandarin speakers, I'm sure that if the work's director and producer had not been Hong Kong cinema veterans, there wouldn't be so many faces familiar to Hong Kong movie fans among its supporting cast.

But if the on-screen roles played by the likes of Norman Chu, Paw Hee Ching and Henry Fong Ping could easily have been played by Mainlanders, I get the feeling that's less of a case with regards to the many Hong Kongers working behind the scenes of this offering which feels positively path-breaking in a number ways (and not just because its 3D effects actually work).  All in all, a good measure of Sword Master's impressiveness was shown in it being the rare theatrical release I've seen where the vast majority of the audience I viewed the work with staying seated throughout the entirety of the end credits rather than bolt for the exit long before that, as Hong Kong audiences are prone to do!
My rating for this film: 8.5
Posted by YTSL at 11:59 PM