Sea squirt, sake and more at Sasagin! ;b 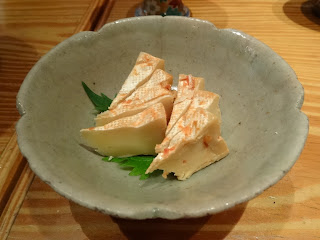 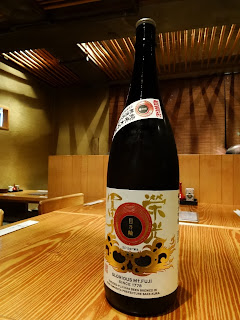 This especially when paired with nihonshu such
as this Glorious Mount Fuji sake! :b 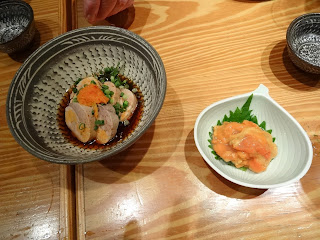 Ankimo (monkfish liver) in ponzu is another Japanese delicacy
I love with nihonshu but I've belatedly discovered that I care much
less for sea squirt and am glad we just a small portion of it! ;)

How does one top of a visit to Funabashi, during which I sampled sauce ramen for the first time ever and made a pilgrimage to the Funassyiland flagship?  Put another way: how does a day that involved my visiting my favorite gotouchi chara's hometown, during which I got to try one of Funassyi's favorite foods and got myself some choice Funassyi items. get better than it already was?
The short, simple and absolutely honest answer is: with one more visit to Sasagin, the Yoyogi-Uehara sake bar-izakaya where I got to truly realizing one evening back in 2012 how diverse nihonshu could be, and how much I love so much of it!

Whereas I had only ever previously been there with a friend who loves imbibing alcohol as much -- if not more -- than me, this time around, we went to Sasagin with both of our mothers in tow!  And yet -- and this is a measure of how wonderful the place -- we enjoyed being there a lot anyway, and so too did our mothers; one of whom (mine) doesn't drink alcohol as a rule!

Here's the thing: the sake offered up at Sasagin is impeccable; this especially when the bar's owner, Narita-san, has come to know you well enough to feel able to go all omakase on you without your even asking!  But, then, so is the service, and the food -- whose menu includes regular items, regular specials and also seasonal specials.
Suffice to say that even while my friend with whom I usually go to Sasagin and I did quite a bit of drinking that evening, we also did quite a bit of eating -- and our mothers (even hers, who does drink alcohol) actually ate more than they drank.  But while pretty much everything we had was delicious (including the miso-flavored camembert that I think makes for a great drinking snack; more so even than ankimo!), there was one item that (even) I thought was too exotic tasting for me to actually really like: sea squirt.
As I recently described to a Japanese friend (who was shocked that I had finally came across a Japanese delicacy I actually didn't care for): it tasted too clearly from the sea for me.  And coupled with its soft, slimy texture, it was all too much -- so that, even while I did eat what I had put into my mouth, I refused to have a second sampling of what is a marine invertebrate that, as far as I can tell, very few peoples in this world consume, never mind consider to be a prized delicacy! ;b
Posted by YTSL at 11:15 PM

I like Miso and it been while since I had any Sake.
Coffee is on