Sensoji after dark appears more attractive than during the day! 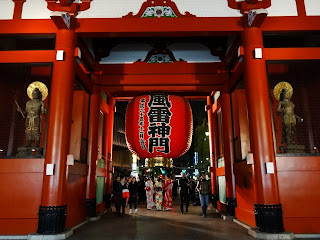 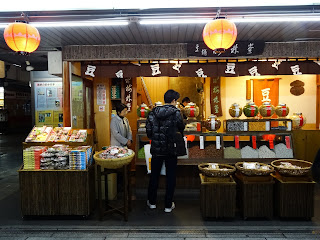 ...as do a variety of shops and restaurants, some of which
look significantly older and more traditional than others 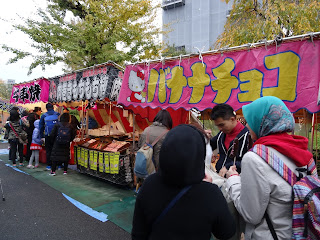 Images of Hello Kitty and headscarved Muslim visitors appear
to be par for the course at this popular Tokyo temple too! ;b


Since Kappabashi and Sensoji are located within walking distance of each other, it made sense to the party I was with to combine visits to those two Asakusa attractions which seem very different at one level but actually both are places where foodstuffs can be found.  Thus it was that after we had checked out Tokyo's Kitchen Town earlier in the day, we made for the Buddhist temple whose origins date back to the 7th century AD (even if the bulk -- if not all -- of its structures having been built after the Second World War, when their rebuilding came to symbolize rebirth and (the return of) peace for the Japanese).

Unfortunately, on account of Sensoji being a mega popular attraction for foreign tourists as well as locals, I found the temple grounds as well as the main temple building itself to be uncomfortably over-crowded as well as not at all peaceful and serene.  And it wasn't until my two friends, my mother and I beat a retreat to a nice nearby café -- whose two other customers left shortly after we sat down -- where I opted for a soothing cup of creamy matcha (and the others in my party refreshed themselves with kakigori even though the weather was on the cold side!) that I got to enjoying my time at Sensoji.


For after we left the café, we found that darkness had fallen and the crowds had noticeably thinned to the point where it was easier to walk about.  With regards to the latter: It's one of those things that one wants to go to famous places on one's travels but would ideally like for those place's fame to not have ruined them through such as too many people being attracted to visit them at the same time!  As for the former: there are places which look more stunning and dramatic after dark than during the day -- and I got to realizing that evening that Sensoji and its environs (which I had only seen in broad daylight on my one previous visit there back in the fall of 2011, when way fewer people were willing to holiday in Japan on account of the disasters that had befallen it earlier in the year) are among them.

In particular, the scene at the Kaminarimon (which stays open at all hours and consequently actually is a 24 hour attraction) was really attractive; with the gold colored metal bits at the base of its giant lantern and constituting the haloes of the statues placed on either side of the gate looking extra shiny when they reflected the light off such as camera flashes as well as nearby street lamps.  And in the relative dark, the beautiful kimonos worn by some Japanese female visitors appeared more colorful and striking than they already can be during the day! ;b
Posted by YTSL at 10:53 PM

I've always found lanterns interesting. I know a few people who have collected them over the years.
Coffee is on

Should you ever come over to Hong Kong then, do make sure to time your trip to coincide with the mid-autumn lantern festival celebrations! ;)