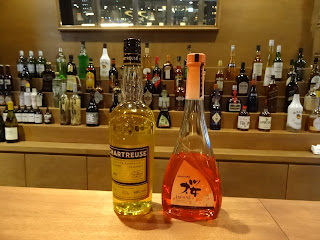 The classic and exotic at Bar de Luxe 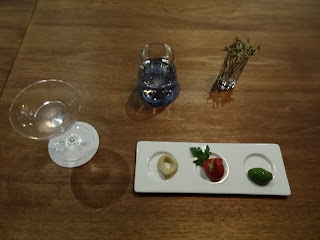 
This past September and October, Tokyo's Bar High Five participated in a pop up bar-within-a-bar set-up at the Mandarin Landmark's MO Bar.  Unlike my experience with the similar PDT pop-up bar last year, I was so taken by the cocktails prepared by both Ueno-san (on my second visit) along with Yuriko-san (who prepared me stellar "off the menu" Vesper Martinis on both my visits) that I was pretty ecstatic to find out that Ueno-san would be involved in the establishment of a cocktail bar in Hong Kong where Yuriko-san would be the head bartender.


Although Bar de Luxe has yet to officially open*, I got an exclusive preview this evening of what will be on offer at this cocktail bar located on the 30th floor of a high-rise building in Central's Wyndham Street.  And while I figured I was pretty privileged to get a personal invitation from Yuriko-san to try out some cocktails and food this week, I didn't realize how much I was -- until I walked into the bar, past an "in training" sign, and was told that I'd be the only guest for the whole entire night!


Although Yuriko-san offered to start me off with a Vesper Martini, I actually declined -- telling her that I knew how good she made them but was interested in trying some other cocktail concoctions by her.  And it's a measure of how great a bartender I think she is that the three other drinks she made for me this evening -- all of which I've never had before but were geared to my tastes, as Yuriko-san read it -- were all eminently drinkable!


First up was the Pink Gimlet, a refreshing drink Yuriko-san informed me was originally created by Ueno-san, and added campari to the usual gin (in this case, Boodle's dry London gin), specialty bitters and lime juice gimlet mix.  After I told her I'd like something stronger for my second cocktail, she concocted a syrupy and sweet -- but not to syrupy and sweet -- drink that, this time around, combined Boodle's gin with yellow Chartreuse and an unusual -- as far as I was concerned -- sakura (cherry blossom) liquer.   And although part of me wished I could continue further, I decided to err on the safe side and have the Black Negroni (which I actually like more than the White Negroni, which I also prefer to the regular Negroni) she made be my final alcoholic libation of the night.


As one might be expect of a Japanese watering hole, there was food to at least nibble on in between sips of alcohol.  In addition to the usual serving of mixed nuts, I also had such omakase treats as a large green olive from Italy, capers stuffed with tuna, and a cooked dish that was strong on the marinated anchovies (and can also be made with smoked anchovies along with the regular version of the fish).  Still, while undoubtedly tasty, there's little doubt that Bar de Luxe's main draw most definitely -- and expectedly -- will be/is the cocktails rather than the food (which one nonetheless will feel compelled to have some of in order to line the stomach and make one physically more capable of imbibing more of the delicious libations on offer)!

With a number of seats at tables as well as at the bar itself, Bar de Luxe has a significantly larger capacity than the likes of Bar Butler and Sake Bar Ginn.  But while some of the tables offer more scenic views on account of their being closer to the large glass windows that line one of the bar's walls, I still would very much consider the seats at the counter -- where one is closer to Yuriko-san and her team (who include Hong Kong bartender Milk), and hopefully will be engage them in conversation about what to drink (next) -- to be the prime seats.

And the truth of the matter is that the bartenders -- rather than such as the view or decor -- is why the likes of me go to a Japanese-style cocktail bar.  More specifically, they can come across like the alcohol equivalent of sushi chefs: in that they really know their ingredients, what they're doing, and the customers who become regulars at their establishments.  And even more so than the sushi chefs, these bartenders will have a good sense of what their (regular) customers like -- and consequently be able to offer up drinks when one visits that one will like, even love, and even when it may be the first time one tries them! ;b

*Update: Bar de Luxe was granted its liquor license and opened for business on Friday, December 23rd!
Posted by YTSL at 11:39 PM