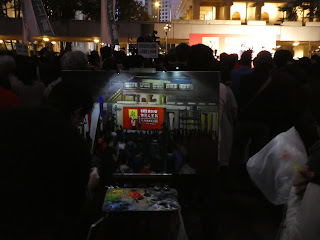 An artist at work at Chater Garden last night 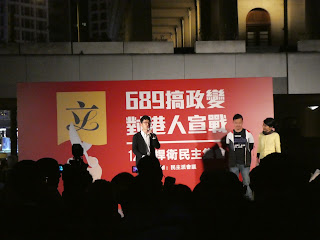 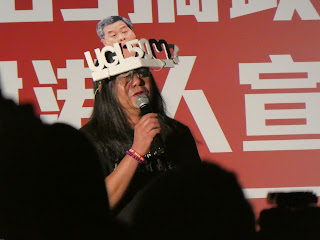 Before it was a garden, it was the site of a cricket pitch -- and before that a military parade ground.  And up until two and a half years ago, I only had ever attended a free art event there.  But although there was an artist at work painting what he saw at Chater Garden yesterday evening and a Cantopop star (Anthony Wong Yiu Ming) up on stage at one point, politics actually was the focus last night.

In the wake of 689's announcement the day before that he's not seeking a second term as Hong Kong's Chief Executive, the mood was largely good at what sometimes felt like a pep rally at which a slew of pro-democracy politicians and activists, including new Legislative Council members Chu Hoi Dick, Nathan Law, Lau Siu Lai and Edward Yiu along with veterans such as "Long Hair" Leung Kwok Hung, Claudia Mo and Margaret Ng, spoke to the assembled crowd.  Along with the celebration though could be heard notes of caution and also wariness, fear and indignance as to what might -- and who will -- come next could be heard, with anti-Regina Ip and Carrie Lam campaigns already being mounted, complete with satirical posters and slogans.


And then there was the actual reason why the rally had been called: to protest the Hong Kong government's move to disqualify four more elected lawmakers (in addition to already disqualified localists Baggio Leung and Yau Wai Ching) -- despite the quartet's oaths of office having been accepted by Legislative Council president Andrew Leung.  What comes across as a witch hunt, excuse to get rid of more pro-democracy politicians, or both is made all the more infuriating, and ironic, in view of Nathan Law, Law Siu Lai, Edward Yiu and "Long Hair" Leung Kwok Hung having collectively amassed a total of 185,727 votes at the September 4th Legislative Council elections; far more, to say the least, than 689 has ever received in any political election, including that which led to his being elected Hong Kong's Chief Executive.


Attention was also directed -- and criticism hurled -- at the current system for the election of the Chief Executive.  On what also happens to be the second anniversary of the commencement of the clearance of the Occupy Admiralty camp, the fact that today was when just 230,000 or so eligible voters (in a territory of over 7 million people) went about selecting a panel whose 1,200 members will decide who succeeds CY Leung as the territory's political leader in March 2017 can appear to make it so for some that the 2014 mass political protests were in vain.

But lest we forget, one of the aims of the Umbrella Movement had been to get 689 out of office.  And that event is just a matter of months away now; and feeling like such a done deal that last night, suggestions were being made that the popular "Leung Chun Ying ha toi (step down)" chant should be replaced by "Leung Chun Ying chor gaam (be imprisoned)" (over the UGL matter -- which Long Hair adeptly reminded rally attendees about -- among other things)!
Posted by YTSL at 10:26 PM

Hi YTSL! Thanks for the report! It is kind of sad that after the Umbrella protests nothing was accomplished in terms of universal suffrage...how long do we have to chant this before we can directly elect our own leader who will be focused on what Hong Kong people want/need?

That same artist was there that other Sunday evening when we marched from Wan Chai to Central and then you went on to the Liaison Office...

Who knows how long before we can directly our own leader and/or have a leader who's focused on what Hong Kong people want/need (rather than just pleasing Beijing/looking after his or her own interests)? But, as this week's events have shown, even a week can be a long time in politics!

On another note: that artist works pretty fast and well!