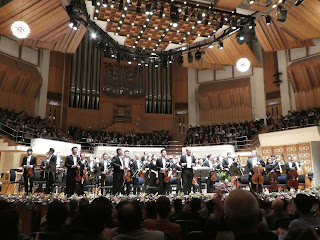 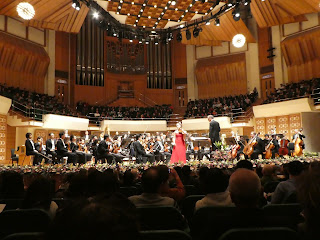 Soloist Sara Domnajnic also performed at the
HK Phil's New Year's Eve Celebration concert
This time last year, I was in Amsterdam.  On Christmas Eve 2015, I attended a concert at the Concertgebouw with my German friend -- who had met up with me in the Netherlands, as did a friend from the US -- and had been initially taken aback, then highly appreciative to find that photos were allowed to be taken during what turned out to be a curious mix of religious celebration, classical music and pop music.
On that occasion, I marvelled at how photography was allowed at such an illustrious musical venue as the Concertgebouw -- which is famous for its perfect acoustics and also offers up lots to visually appreciate.  But after hearing the announcement for the first time ever last night that photography was allowed in the Hong Kong Cultural Centre's Concert Hall, I'm beginning to wonder whether it's one of the traditional perks of attending a festive concert!
Even without that privilege, I felt that last night's concert was pretty special.  With the same light classical music program as this evening's, it's -- as its title announces -- a New Year's Eve Celebration.  And even without resident conductor Jaap van Zweden at the podium (or, for that matter, in the hall as far as I know), the Hong Kong Philharmonic Orchestra -- and, for two pieces, solo violinist Sara Domjanic also -- did an excellent job playing music from Spain (composed by Jeronimo Gimenez and Manuel de Falla), France (courtesy of Maurice Ravel and Jules Massenet), Germany (courtesy of Richard Strauss) and, last but certainly not least, Vienna (composed by Johann Strauss II).
Originally from Israel but based in Spain, guest conductor Yaron Traub is the kind of fellow who, even from afar, you know has a twinkle in his eye along with a demeanor that gives you the distinct sense that he loves to dance, entertain and a rollicking good time!  Put another way: he was pretty much darn perfect to direct the orchestra in performing lively works such as Johan Strauss II's Spanish March and Tritsch Trasch (Thunder and Lightning) polka, Maurice Ravel's celebration of Gypsy music that is Tzigane, and both the Dance of the Neighbours and Danza Final from Manuel de Falla's The Three-Cornered Hat Suite!
But while certain members of the audience such as the woman sitting directly in front of me literally nodded off during the quieter (more relaxing?) sections of the program, notably Richard Strauss' Der Rosenkavalier Suite and even Johan Strauss II's Künstlerleben Waltz, I actually liked these more lyrical works even more, especially Jules Massenet's Meditation from Thaïs -- which is as lovely to listen to as it was taxing for me to play, even decades ago when my fingers were far more nimble than they now are!  Indeed, I'd go so far as to state that that beautiful, meditative piece was my favorite of the evening along with another classic work -- this one played as the first encore piece -- Johan Strauss II's super recognizable The Blue Danube Waltz.
In a year where I've been treated to a number of wonderful musical concerts, both at the oft criticized Hong Kong Cultural Centre Concert Hall and the more acoustically sound Hong Kong City Hall Concert Hall (and also one very different -- and actually rather moving -- one outdoors in Admiralty), it was lovely to enjoy one final musical evening before this calendar year draws to a close.  On occasions like this, I tell myself I should take more advantage than I've done in recent months of Hong Kong being far from a cultural desert, especially since it actually has not just one but four quality orchestras (with the others being -- in no particular order -- the Hong Kong Sinfonietta, City Chamber Orchestra of Hong Kong, and Hong Kong Chinese Orchestra)! :)
Posted by YTSL at 8:01 PM

This is a most entertaining entry. What you term "light classical music" is perfect for New Year's celebrations. Soloists, whether singers, violinists, or pianists - backed by a good conductor and orchestra - can be especially memorable - at any time of the year...I enjoy listening to violinist Anne-Sophie Mutter, accompanied by the late Maestro Herbert von Karajan and the mighty Berlin Philharmonic.

Previously for local concert halls over the past few decades I was only able to take photographs in two 'Canadian Brass' concerts as Chuck (the Tuba player and one of the founding member) would always ask the audience to take pictures or movies even before the Internet become available. Just try not to use Flashes. That was back in the 1980s.

I was lucky enough to have watched them four times. Three times here while once in San Francisco.

Yes, the HK Phil's New Year's Eve program really was perfect for the occasion, I felt. As for soloists: my all-time favorite remains violinist Ning Feng but this year, there's a double bassist who'll be in my "10 highlights of the year" list! :)

Now that you've sung their praises, I'm going to make a point to try to attend a Canadian Brass concert when/if the quintet returns to Hong Kong! :)

As for the 'Canadian Brass' they are extraordinary entertainers since their first line-up decades ago. They have a Youtube channel (https://www.youtube.com/results?search_query=canadian+brass). Enjoy. Some bigger CD stores in town may have some of their discs.

Thanks for the link to the Canadian Brass' Youtube channel but I'm sure nothing can beat hearing (and seeing) them perform live! ;)