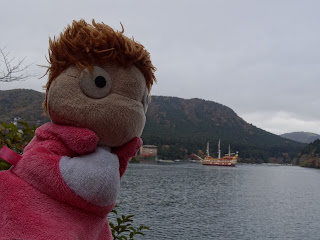 Puppet Ponyo and a "pirate ship" in Hakone! 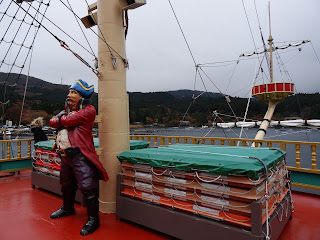 Spotted on an upper deck of one of the ships! 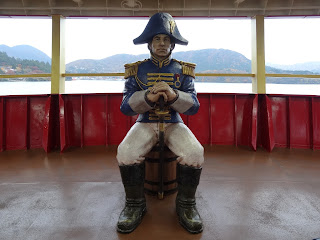 This figure looks sterner as well as more respectable... ;b
Long before one gets to Hakone, one will have heard about the "pirate ships" that sail from one side of Lake Ashi (or Ashinoko in Japanese).  Even so, it can be quite the shock to see these vessels sailing about on a crater lake located in a part of Japan where one sometimes can also get treated to stunning views of Mount Fuji that will take your breath away; and this all the more so when the same body of water also has swan pedal boats floating about it!
Things get even more surreal when one goes aboard these ships.  Because of how much they resemble ships that had their heyday centuries ago on the outside, one almost expects their interiors to not be as comfortable as they in fact are; equipped as they are with comfortable seats and heating, and also Japanese and English language recorded commentary since they are in fact used for Hakone sightseeing cruises.  And even more startling is the presence of a few life-sized figures of seamen from another time and place (and even, in one case, a very obviously Japanese photographer clad in Western garb from at least a couple of centuries ago)!
Since returning to Hong Kong from my most recent Japan trip, I've down some research and discovered that what I -- and many others -- have been referring to as "pirate ships" are actually replicas of official battleships!  More specifically, on any one given day, one will find replicas of an 18th century French fleet flagship, British Admiral Lord Nelson's flagship at the Battle of Trafalgar and a 17th century Swedish warship dubbed the Lion of the North!

As yet, however, I haven't found out why the decision was made to have Hakone cruise ships resemble these 17th and 18th century European battlerships.  And while the Japanese might find that they add an exotic touch to their domestic vacation, I must admit that part of me wishes that I could cruise about Ashinoko on a more traditionally Japanese looking vessel! ;b
Posted by YTSL at 11:59 PM

OMG, was my immediate reaction upon reading about 17th & 18th century European war ships as tourist attractions on Lake Ashi. But, then I thought, just "go with the flow. You're going with friends and that's most important." When we got aboard I thought they were fine as there was plenty of seats and windows for everyone. Plus there were plenty of places on the decks to take photos of the scenic views

I can understand the swan theme for the peddle boats -- and have also seen swan peddle boats on Seoul's Han River. I just would like to know the thinking behind the European warships idea -- and, actually, also how long those vessels have been sailing about on Lake Ashi. (Yes, more research to do!)