Enjoying the colorful sight of koyo in Hakone 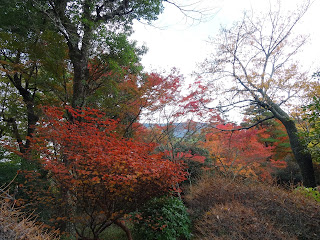 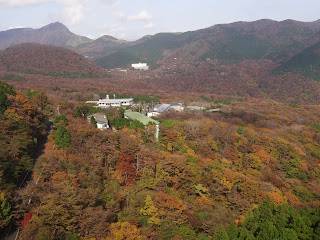 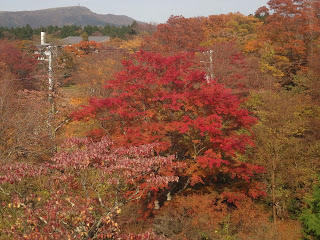 When viewed up close, this is the kind of sight
that causes people to literally ooh and aah ;b
When a friend asked my mother what her favorite part of our recent Japan visit was, she answered first that there were many highlights but then came right out and said that for her, it was seeing the red leaves.  Even given the possibility that my mother was particularly bowled over by the koyo (colorful leaves) that have been described as the autumnal equivalent of spring's cherry blossoms on account of her living in a part of the world where the seasons of the year are described as "dry" and "rainy" rather than spring, summer, fall (or autumn) and winter, I really do reckon that the fall foliage in Japan is quite something to behold.
As it so happened, we were in Hakone when the koyo there were displaying their peak colors.  And it's true enough that not a single day passed by when were in this popular resort area that we weren't moved to sigh at the beauty of the fall foliage around us. (On a related note: it really did add to our enjoyment of being at the lovely Gora-Kansuiro that our suite of rooms offered up views of many a red-leafed tree in the ryokan's expansive garden.)
Early on during our Hakone sojourn, we were treated to the eye-catching sight of clump upon clump of koyo on our ride on the Hakone Tozan Train that took us up into the mountains from Hakone-Yumoto down in the valley.  In retrospect though, I feel that it was only on the third and final day of our stay in this very scenic part of Japan that the fall foliage revealed their true glory to us.
The thing is that, as it so happened, the first and second days that we were in Hakone were on the misty side.  Consequently, when things cleared up considerably on the third day, my friend who lives in Japan got all excited at our finally having a chance to see Mount Fuji in Hakone -- and highly recommended that we forego our planned visit to the Hakone Open Air Museum that day (which was fine by me since I had been there on my previous visit to the area) in favor of aiming to catch sight of Fujisan while riding on the Hakone Ropeway.
Since that approximately 30-minute-long ropeway/cable car/aerial lift ride may well be my favorite part of Hakone, that was perfectly fine by me.  And this time around, the experience was made so much better -- not only with Mount Fuji sightings but also by it offering up super clear as well as panoramic views of whole forests of trees sporting beautiful fall foliage that threatened to take the breath away and, at the very least, had me grinning madly at times! ;b
Posted by YTSL at 11:40 PM

I don't believe I have a favor color of leaves. But I find it peaceful watch them drift to the ground.
Coffee is on

Maybe because green leaves are a dime a dozen in Hong Kong (and my native Malaysia) but red leaves are not, I must admit to thrilling more at the sight of the latter. Also, I don't care too much for dry brown leaves because they look dead, and often are! ;)