Feasting on fabulous food in Japan this fall (Photo-essay)

Since returning from Japan two weeks ago, I've only been twice to eat at Japanese restaurants. Granted that in this time, I've been to a Japanese cocktail bar once and Sake Bar Ginn twice.  Still, that's way fewer times that I've eaten Japanese food over the course of a fortnight than has become the norm here in Hong Kong.

It's not that I've gone off Japanese food.  Rather, it's because I ate so much and such fabulous food on my recent Japan trip -- among things, I returned to Kabuto for more eel parts on sticks, ate primo sushi or sashimi every day of the trip, had decadently rich ankimo at least five times, and amazingly juicy wagyu beef at three different meals -- and have such strong memories of those oishii and umai experiences that I'm afraid that what Japanese fare I eat here will inevitably disappoint!

Doubtless at some point in the near future, the urge to go have more Japanese food will surpass my fear of feeling underwhelmed by what I do eat here.  But in the meantime, here's offering up a selection of photos that hopefully will give a good idea of the kind of dishes I had on my recent trip, and loved so very much... ;b 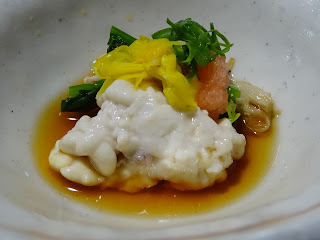 Shirako (described as "codfish soft roe" on the English menu)
was served along with spinach, Enoki mushroom, green onion,
grated carrot and radish, and gingered vinegar
at our first dinner at Gora-Kansuiro ;b 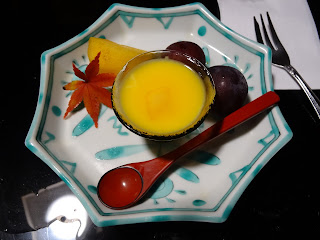 That same dinner's delicious seasonal dessert of persimmon,
Kyoho grapes and mango pudding looked like a work of art! 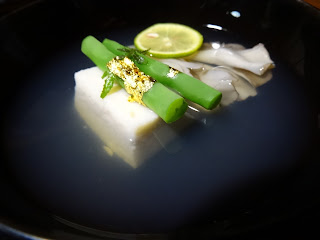 No ordinary soup for our second dinner at Gora-Kansuiro;
instead, we got one whose ingredients included scallop,
Matsutake mushroom, green bean, leaf bud, gold leaf and citron! 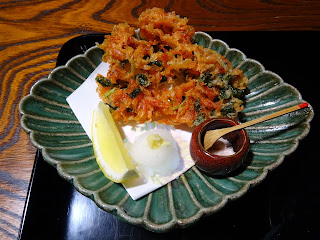 Another standout course at our second dinner at the ryokan
was the deep fried mixed pink shrimp, which was so tasty it
didn't need any salt but which I did squeeze a bit of lemon juice on
and ate with great relish with the grated radish and ginger 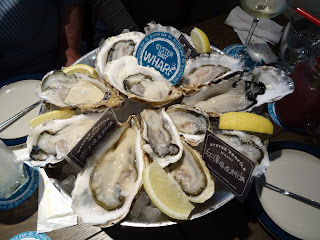 One dozen oysters from three different parts of Japan
-- and all just for me! :))) 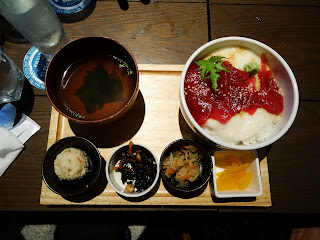 At the same lunch in Tokyo, I also had this repast whose
main dish consisted of a generous portion of zuke-style tuna and
tororo (grated mountain yam) on a bed of fluffy white rice! 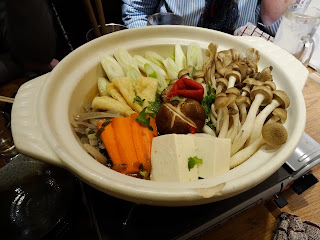 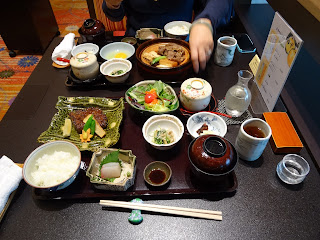 And for the final lunch of our Japan trip, my mother and I opted for
wagyu beef: hers prepared as sukiyaki, mine in steak form :)))
Posted by YTSL at 10:46 PM

Are those Kumamotos in the middle? I don't usually fancy oysters but I could not resist the Kumamotos.

I remember that the oysters were from Hokkaido, Hyogo and somewhere in Kyushu (and that they were all delicious!). Don't think the third group were actually from Kumamoto per se -- but wouldn't be surprise if they are Kumamotos. ;)

Great photos. I was at Kyoto two weeks ago and had great food (for some reason to me the food in Kyoto tastes best - not that I had food at many other places) Japanese food is indeed great.

Ooo, it sounds like we were in Japan at the same time -- just in different parts of the country! I enjoyed eating in Kyoto, like I do everywhere that I've been in Japan. While in Kyoto, I had some really good yakitori as well as soba, etc. Funnily enough, despite my loving them, I don't think I had any soba or yakitori this time around! ;)

The leaves were fantastic. The trip I had to Enryakuji ended up being the highlight (since I was not able to visit there in my previous two visits) I had mostly tofu :) (hard to find where I live) and various noodles (soba included)

Wow re your having been to Kyoto three times already! And your seeming to love tofu so much. I like it but... well, sushi/sashimi and wagyu beats it any time for me! ;b

Not everywhere for tofu but in Kyoto somehow tofu is really delicious and also there is a nice variety.

I also tried soy milk noodles/spaghetti this time and I highly recommend.

Actually the best meal I had in Kyoto this time was at a vegetarian restaurant (focusing on sesame) called Gomacro Salon - which I have actually came across walking, happy coincidence.

I have had fish (of course, where else is salmon nigiri this cheap?) and beef (only once in a week) but mainly it was tofu and vegetarian. Not by conscious choice though, I actually realised it the first time I replied to your post, thinking back on how delicious the food there was and realising I mostly had tofu of all things. Did Kyoto cured my carnivore instincts? I don't know since I mostly eat fish as protein since coming back!!!!!!!

I'm happy with tofu in Chinese cooking as well as Japanese. Probably my favorite types of tofu dishes in Japan are agedashi tofu and yuba cooked pretty much any way. And fish (or seafood) is my favorite protein, though I really do also love wagyu beef.

Have to say though that salmon nigiri is far from my favorite sushi. Give me any type of tuna, ikura, uni, kani miso, sanma, saba, etc. over it any day! ;b

Teehee at the image of you drooling onto your keyboard! I'm actually not a super big fan of ramen but on this recent Japan trip, I had really delicious sauce ramen in Funabashi. Check out my blog post about that experience, if you haven't already! ;)