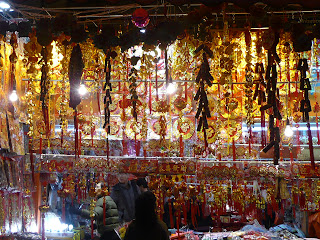 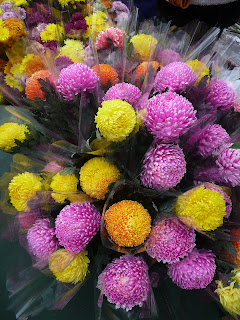 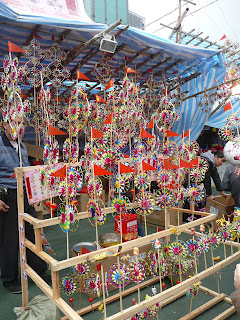 Festive decorations also were on sale
at the Flower Market
Kong Hei Fat Choi/Keong Hee Huat Chye/Gong Xi Fa Cai once more to one and all -- and for those who think I'm (too) late with my Chinese new year greetings, do please be informed that the Chinese New Year festivities traditionally last(ed) for 15 days! ;b

Alas, however, I was back at work on the third day of Chinese New Year -- and this despite it being a public holiday in Hong Kong. At the same time though, what with Chinese New Year having fallen on a Monday this year, I have to admit to having been happy enough that I had a "long weekend" to get into a festive, holiday mood.

Also, if truth be told, the decorations on display in many parts of Hong Kong and slew of Chinese New Year-specific activities taking place also helped get me feeling celebratory. And after avoiding it in previous years for fear that it would be way too crowded for comfort, I finally paid a visit to a Chinese New Year Flower Market -- in fact, the biggest one of the lot over in Victoria Park!

What with the weather that day (and on subsequent days) having been on the cold and damp side, the crowd turned out to be not as horrifically large as I feared. At the same time, it wasn't raining so hard that a dampener was put on the affair. So, unlike Maggie Cheung Man Yuk and Leon Lai's characters in Comrades, Almost a Love Story, my time at the Flower Market did not turn out to be a wash out.

And although I didn't go on a shopping frenzy unlike some other people, I still did enjoy myself there -- by window shopping, viewing the whole affair for the festive spectacle that it is, taking photos while there and, also, just feeling a sense of communitas by way of taking part, in however small a way, in a local, communal activity.

Indeed, the overall experience was so positive that I definitely wouldn't mind repeating it again -- unlike that involving viewing the Chinese New Year fireworks display in Victoria Harbour from a boat which I had some years back, one that was so uncomfortably chilly as well as sea-sickness inducing that I've since been put off even wanting to view that annual festive pyrotechnic display from land! ;(
Posted by YTSL at 9:44 PM

Happy New Year YTSL and to all!

Glad to hear that you were in the holiday spirit this year and enjoyed the holiday.

I don't remember that scene from "Comrades..." was that when they were trying to sell Teresa Teng cassettes? It has been awhile since I have seen the film.

Happy New Year, Yvonne! I've always wanted to spend a CNY in HK or someplace in China - to have a 'complete' Chinese New Year - with the 'real' Chinese atmosphere. Maybe one of these years soon...

Kong Hei Fatt Choy to you!!! HK must be very happening since its the dragon year.

Happy New Year :) This year was extra special for me, because it coincided with my own birthday :) I'm not Chinese, but here in Toronto we have a large Chinese population, and I just love the celebration :)

Sounds like a delightful way to spend a civic holiday.

Happy New Year!
Anything for a reason to celebrate :-)

I haven't seen "Comrades, Almost a Love Story" in years too -- but yeah, the scene I was referring to was indeed the one in which Leon Lai and Maggie Chueng's characters were trying to sell Teresa Teng cassettes. :)

Thanks, and happy new year to you too. :)

I think Chinese New Year in Malaysia can be pretty "real" too -- and, actually, have to say that it can feel more festive than Hong Kong because Hong Kongers generally celebrate in a more private (family) way than the more communal (it seems to me) Malaysian way. :)

It's early days yet to say if Hong Kong's especially "happening" during the dragon year -- but, as you know, it's "happening" even in non-dragon years! ;b

Belated birthday wishes to you! Did you catch a Chinese New Year parade or lion dances in Toronto on your birthday? Hope so! :)

FYI, in my final years in the US, I'd go hiking over the Christmas period with friends. So hiking during Chinese New Year's a festive continuation from those years for/to me... :)

Bet you wish you were here then -- as in Hong Kong, you have two new year celebrations rather than just one! ;b

Kong hei fat choi once more to you! :)

I love those photos!
Such a nice post, I must say.
My warmest chinese new year wishes to all!
Kung Hei Fat Choi!

Thank you -- and happy upcoming Chinese new year to you too. :)

You're welcome. (And I'm glad people are still reading this blog close to one year on.):)