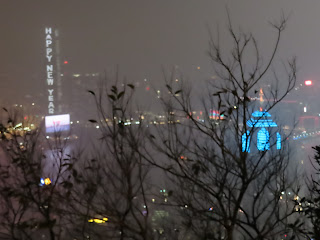 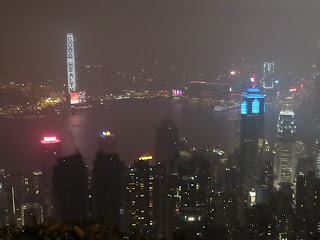 Something many (all?) of us would like to have this year!
I went out hiking yesterday, the second day of Chinese New Year.  For a change, I decided to go on on that would take place partly after dark. (I don't usually do this but I know that the Victoria Peak Circuit is lighted -- and, in fact, have been on it in the dark twice before.)  And while my plan to catch the sunset from the Peak wasn't entirely successful (due to conditions being hazier than I would have liked), I did get the views of the city lights that I had hoped -- and more because, as it turned out, I also was treated to the sight of various new year messages put up on the sides of Hong Kong's tallest building, the International Commerce Centre (ICC) over in West Kowloon.
Along with "Happy New Year"(note: no "Chinese" or "lunar" specified; there's no need since we are in Hong Kong and everyone knows which new year people are currently celebrating!), there were wishes put up for "Good health" along with such as "Good luck", "Happiness" and "Prosperity".  Speaking of good health: Three years ago yesterday was when the Mainland Chinese city of Wuhan went into lock down for the first time as a result of what was then referred to as the Wuhan coronavirus (but now is more frequently referred to as Covid).
And three years ago today was a strange Chinese New Year Eve: one which saw Hong Kong still in turmoil (a reminder: the anti-extradition bill/pro-democracy street protests continued past 2019 and through to July 1st, 2020, the first full day of Hong Kong's national security law era); and also feeling like we were in the calm before the storm phase of a new pandemic.  And so it proved, with things changing really quickly and dramatically on the health front.
A measure of how quickly things changed back in January 2020: On the first day of Chinese New Year, 2020, I went out hiking (with a friend) and didn't see anyone wearing a mask out on the trails.  The next day, I went out hiking again -- and on the second day of Chinese New Year, 2020, I saw a number of hikers wearing surgical masks, including up on Mount Butler; a 436-meter-high hill on Hong Kong Island that I have to admit to panting quite a bit whenever I hike up it!
Fast forward to Chinese New Year 2023 and masking is still required in Hong Kong for the most part -- but not in country parks and/or when exercising.  Even so, I saw quite a number of masked folks on the Peak Circuit yesterday.  Something quite different from my recent excursions in the area: the presence of tourists; including those speaking Mandarin but also such as Korean and Western languages other than English.
I know that the tourist influx to Hong Kong is by no means at the level that it was prior to 2020 but I must say it was a shock to see so many people at the Peak yesterday.  And while the bus I took up to Victoria Gap yesterday was not full, the queues for transportation going down were far longer than I would have liked -- and yes, part of me regrets having gone up to the Peak yesterday (and, also, not hiking down from it like is actually what I do -- be it down to Kennedy Town, Pok Fu Lam, Aberdeen, etc.)!
Ah well, at least I did get in some cool sights yesterday evening -- which, by the way, included my first wild boar spotting of 2023!  (For the record: it was a young boar; and I sincerely hope that it will be okay -- rather than hunted down by the authorities.)  On the other hand, I've yet to come across any Chinese New Year flowers this year.  Maybe (hopefully) I'll be able to remedy this situation on my next hike! :)
Posted by YTSL at 11:59 PM

Any wild boars after dark at the peak this time? :-P I, on the other hand, spotted an Eurasian Coot in CWB Typhoon Shelter on Sunday. It is rare to be seen this kind of winter visitor in that location, I think.

Oh, there are many ducks and other waiders (Black-winged Stilt, Pied Avocet, Greater Painted-snipe and many more that I do not recognize) in the mud beds in Kam Tin River near Nam Sang Wai. For ducks I think I saw Eurasian Teal, Ruddy Shelduck, Northern Shoveler and maybe Greylag Goose. If you have binoculars, bring it when you visit.

Read my post's final paragraph to get your answer to your wild boar query! ;b

And yes, I've spotted an Eurasian Coot in the Causeway Bay Typhoon Shelter -- I wonder if we saw the same one?

Haven't been to Nam Sang Wai in ages. Should go back there before too long! :)

I know nothing about wild boar. We do have bear and wolves here.
Coffee is on and stay safe

Wild boar are far less scary than bears and wolves. Check out some photos of them here:
https://webs-of-significance.blogspot.com/2022/02/looking-for-positives-and-finding.html