A new rabbit year has come around -- and attendant Miffy madness in at least one part of Hong Kong! :D (Photo-essay)

Sun nin fai lok!  That's the Cantonese phrase for "Happy new year!"  I can hear you ask: What about Kong hei fatt choi?  Well, would you believe it if I told you that it actually means "Wishing you wealth and prosperity" -- with no actual reference to a new year celebration?!   (And the same goes, by the way, to Gong xi fa cai -- which is the equivalent Mandarin phrase -- or, say, Keong hee huat chai -- which is the equivalent Hokkien phrase!
Speaking of new years: I grew up wishing people "Happy Chinese new year" in English but in recent years, there's been a movement -- especially, it seems, among North Americans of Chinese descent and/or with other Asian ancestry -- to get people to wish others a "Happy lunar new year" instead.  I know the reasoning behind it but I must admit to thinking it's flawed; this, since, among other things, "the Chinese Agricultural Calendar is indeed a “Lunisolar calendar” (陰陽合曆), not a sheer "Lunar calendar" (陰曆)".  (For more, read this great Twitter thread on the matter by Chau Wun-liong.)
In an attempt to try to bypass this controversy, some other folks (here in Hong Kong and in various other parts of the world which is celebrating Chinese New Year) have taken to wishing people "Happy new year of the rabbit"!  Which is fine; except that it's worth noting that, for the Vietnamese, it's the new year of the cat!  In any case, it can feel like it's the (new) year of Miffy in Hong Kong; especially if one is in Cityplaza -- a shopping mall which has opted to showcase the white cat from the Netherlands this festive season! 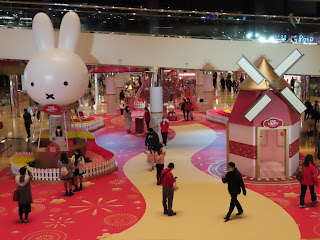 Photographic evidence that Cityplaza really has
gone big on Miffy this festive season! 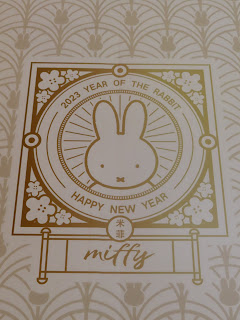 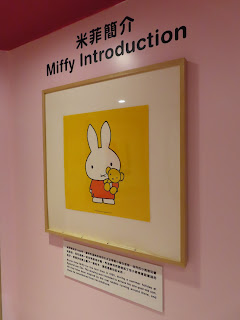 An introduction to Miffy, for those unfamiliar
with the white rabbit with the X for a mouth 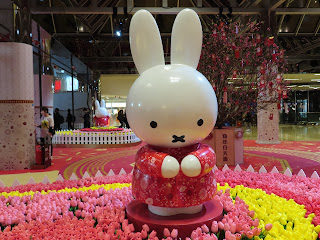 Just one of the large Miffy statues about the place 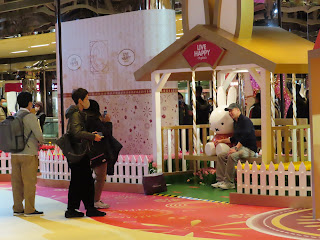 A man posing for a photo with another large Miffy figurine
(And yes, it's mainly adults that I saw posing for pics with Miffy!) 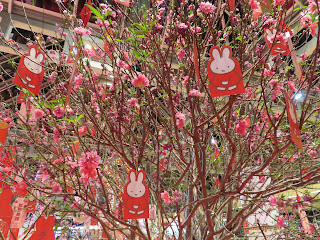 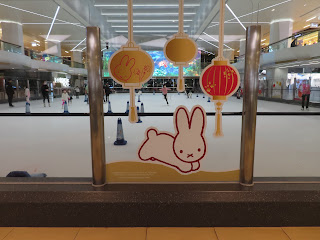 More Miffy images at the ice skating rink in the mall 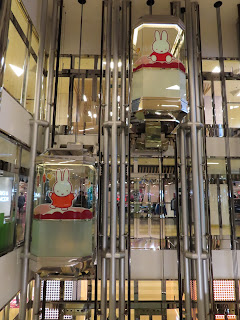 And the Miffy mania extended to the mall elevators too! :D
Posted by YTSL at 11:30 PM

Do you read a lot of Asian blogs? Sounds like it!