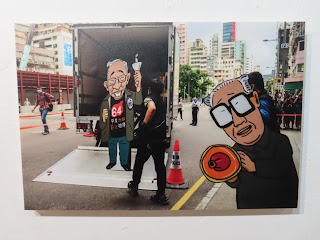 One of the photos on display at an exhibition I went to this afternoon
I went to lunch over on "the Dark Side" today.  This is a nickname that Hong Kong expats (who stereotypically live on Hong Kong Island -- and are also are more likely to live on Lamma Island or Discovery Bay than Kowloonside -- have for Kowloon.
Along the way, I passed by the building that used to house the June 4th Museum that was dedicated to keeping the memory of the Tiananmen Square Massacre of June 4th, 1989, alive, and which was pressured to close and then was raided by the police in September 2021.  Incidentally, a cavernous cinema known as the Dynasty Theatre used to be located nearby.  I say "used to be" because where the 1,920 capacity screening venue was is curently a building site.
Also previously located in the area was the China Cafe, an atmospheric cha chaan teng that was the location for a number of Milkyway Image movies (including, most famously, PTU).  I have to say that I didn't have the heart to go and see what's now in its place.

After lunch (at a popular eatery that's announced that it will be closing sometime next month -- but hopefully will be reopening at another location), I headed over to check out an exhibition put on by the Hong Kong Press Photographers Association.  Entitled Focus on the Frontline 2021, it comprises prize-winning photographs from journalists who covered a range of events including sporting ones (such as the 2021 Tokyo Olympics) and also those which were darker in nature.  These included the stabbing of a policeman outside the Causeway Bay SOGO on July 1st, 2021, by a man who subsequently killed himself, and also a number that turned out to be related to the commemoration of the Tiananmen Square Massacre here in Hong Kong.
More specifically, there's a photo showing the police loading confiscated June 4th Museum items (that included a cardboard cutout of the late pro-democracy activist-politician and chairman of the Hong Kong Alliance in Support of Patriotic Democratic Movements of China, Szeto Wah, holding a commerative candle in his hand).  There also are photos showing the dismantling and removal of the Pillar of Shame from its previously prominent location at the University of Hong Kong's campus.
On display at the exhibition too is a photo of Chow Hang-tung, the lawyer-activist who is actively seeking to keep the flame of the Hong Kong Alliance and the right of people to commemorate the Tianamen Square Massacre in Hong Kong alive even while fighting for her own freedom (and against Hong Kong government efforts to keep her in prison for many years to come).  Seeing the image of her with her inflatable bed in her office really hammers home how dedicated and committed to the cause she is, and has been for years now.
A blurb for the exhibition includes the following paragraphs:

In the past few years, the social and media environment in Hong Kong has undergone tremendous changes. Several influential mainstream media and online media have suddenly ceased operations. Become a freelance photographer.

However, while facing the changes, the photographers still only stayed at their posts until the last moment, shooting wonderful news works with historical significance, and witnessing the transformation of the city together with the citizens.

Some of the photographs give one a real sense of the yeoman efforts and work of Hong Kong's press photographers.  Truly, there are times when I think that they (along with many a journalist, editor (like former Stand News chief editor, Chung Pui-kuen  and publisher (notably Next Digital's Jimmy Lai) truly have been pretty heroic; with many of them going beyond the call of duty to make sure people see what's been going on in the world of Hong Kongers.

I also got the sense from the exhibition that many of the photographs were of people that the photojournalists and/or curators of the exhibition respect and admire, and consider heroes too.   These include Olympians who've brought glory to Hong Kong, notably fencer Edgar Cheung Ka-long and swimmer Siobhan Haughey, and also the likes of singer-activist (and former 612 Humanitarian Relief Fund trustee) Denise Ho and filmmaker Kiwi Chow.

More re Kiwi Chow: his protest documentary, Revolution of Our Times, may never be allowed to be screened in cinemas in Hong Kong but his latest effort, a Chinese New Year comedy entitled Say I Do To Me(!), is scheduled to play in local cinemas over the festive period (and beyond).  And for those who didn't realize: yes, he has remained in Hong Kong all this time.  And it's good to see that he -- and the likes of the similarly openly pro-democracy Anthony Wong Chau-sang -- still are able to find work and an audience in their home city... which may be down and facing dark times but really ought not to be counted out (just yet)!

Activism is so important.
Coffee is on and stay safe

Indeed re activism being important; and something worth doing even in places where it's a dangerous activity.