Leaving Hong Kong -- even for just a vacation, rather than permanently -- is not something to be taken lightly these days! 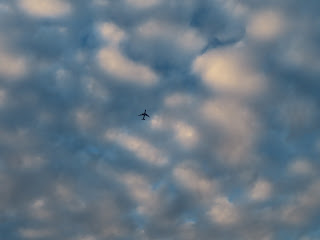 A plane in the Hong Kong sky is a far rarer sight
than used to be the case pre-pandemic... :S
I learnt late last night that one more friend has left Hong Kong.  He was one of the original of the handful friends I had when I moved here in May 2007 -- and the last time I saw him was at another friend's farewell dinner a couple of months back.  It's a good thing I've made other friends in Hong Kong over the years, huh?!
Speaking of which: I had dinner earlier this week with two friends and their friends (who may in time become my friends too -- one way I've made new friends in recent years!). A t one point, conversation turned to travelling for fun -- something which used to be the norm for all of us but which hasn't been for me during the pandemic years.  And, in fact, I've not been out of Hong Kong since October 2019 (on a Japan trip that I've yet to finish chronicling!)!
I think being out of practice in terms of booking flights and such is one reason why I've not done yet to do so now that Hong Kong's finally dropped much of its travel/pandemic regulations. And then there's the sticker shock that I felt a need to brace myself for.  At the very least, I knew that it would not be a good thing (for my wallet, among other things) to travel over the lunar new year period. I've been hearing/reading tales like the following (in this Hong Kong Economic Journal piece for some time now:

Travellers who want to go outside Hong Kong during the upcoming Lunar Chinese New Year would find themselves paying much more than it was before China started allowing its citizens to travel after nearly three years of travel restrictions.

Friends leaving for Japan, the always No.1 destination for locals because of its proximity, nice surroundings and above all, food, said they are paying double, if not triple, room rates than last year"!

And even after I decided to bite the bullet and book flights for after Chinese New Year, the sticker shock really was quite the shock. As in the price I got for the flights was at least twice as much as used to be the case for the route pre-pandemic!
Returning to quoting the Hong Kong Economic Journal piece whose headline queried "Is 2023 the year of expensive travel? (and whose short answer would appear to be an emphatic "Yes!"):

If travel cost is not an issue, flight capacity might be.

HK Express, the budget airline owned by Cathay Pacific, cancelled dozens more flights to Tokyo, Osaka and Okinawa in the first two weeks of February as Japan imposed limits on the number of flights each carrier can operate from Hong Kong to Japan.

For those planning to go this month, chances are their itinerary would be disrupted by Cathay’s union work-to-rule strike starting 19 January.

The union complained about manpower cut on flights, reduction in welfare and excessive workload. Flights between Hong Kong and Japan, for instance, had only four flight attendants, instead of the usual seven crew members to serve 288 passengers in the premium economy and economy class on each flight, the union reportedly claimed.

Not ideal, to say the least!  Also, I've found out that no airline has returned to offering in-town check-in at Airport Express stations; something which was oh so convenient and great.  Also, that the Airport Express trains still don't operate on "regular" schedule (i.e., the schedule which it had prior to 2020).
So much for Hong Kong being "back" as the Hong Kong government being bent on insisting, never mind being back to what passed off as "normal" in the Big Lychee pre-pandemic, never mind before all the pro-democracy protests in which millions of Hong Kongers took part, that the authorities consider to have been so disruptive and damaging to the city's reputation (more so, apparently, than even the draconian national security law that descended upon Hong Kong on June 30th, 2020)!
Posted by YTSL at 11:50 PM