This has been a day of more bad news on the pandemic and persecution fronts.  Re the former: Hong Kong reported 1,619 new coronavirus cases today; with the authorities also looking at some 5,400 preliminary cases; and also the death of a 3-year-old girl -- the youngest Covid related death that this territory has seen to date.  Re the latter: singer-activist Tommy Yuen has been arrested by the national security police "for publishing “seditious” remarks on social media, with intent to incite citizens' hatred against the government".
On the positive side -- and I realize that it's scant consolation for many (but it really can psychologically help some) -- the weather's been lovely today and for some weeks now: ideal for hiking, in fact; which is one reason why I've done a good deal of hiking in recent weeks (see here and here).  Another reason, of course, is that I find hiking to be a great way to relieve stress and release tension.
So off I went on yet another hike this afternoon.  Actually, today's primary reason for going hiking was to try to get in some Chinese New Year Flower sightings before the end of this latest 15-day Chinese New Year period -- and not only was I successful in doing so but I am happy to report that I also managed to get in spottings of nine -- yes, NINE -- wild boar while out this afternoon in Tai Tam Country Park!  Re the latter: I heard from a friend that there had been more wild boar killings by the authorities just yesterday.  So it was good to see that there still appear to be a good number of these creatures -- who, I can attest, are not all that prone to attack humans but, rather, inclined to just walk past them -- around in the wilds of Hong Kong still. 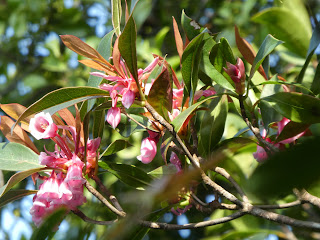 The first Chinese New Year Flowers I spotted on today's hike,
-- and in the New Year of the Tiger, in fact! 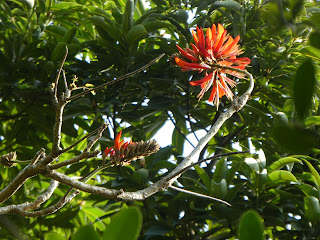 Another stunning bunch of flowers spotted today --
those of the ivory coral tree!

Panoramic view from near the view compass atop Braemar Hill
(click on the image to view an enlarged version of it!) 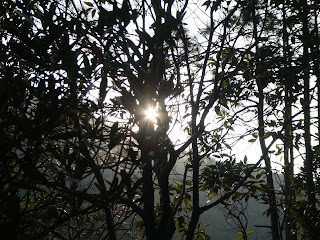 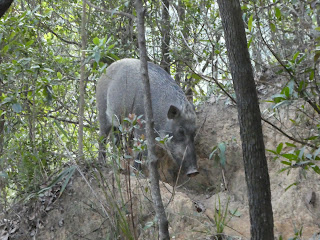 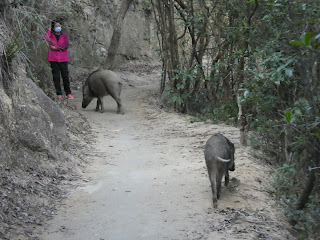 The wild boar turned out to be a mom, with two young 'uns
in tow -- but none of them wanted any trouble
(and ditto the humans that it passed by) 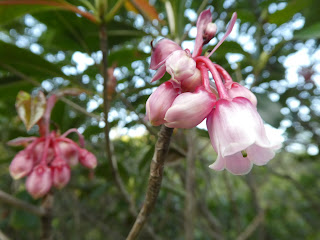 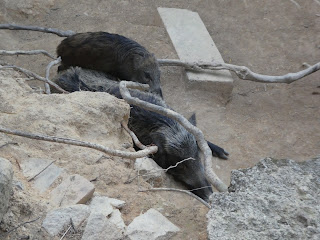 Three more wild boar spotted -- again, what appeared to be a trio consisting
of a mother and two children (In this case, they appeared to be
relaxing together -- with one kid massaing the mother with its snout!)
Posted by YTSL at 11:55 PM

Good to know those wild boars are still out there. This also proved if they did not get provoked, they are pretty harmless. I guess they fear us even more than we fear them.

I been trying to get a little more walking in. I never seen a wild boar.
Coffee is on and stay safe

Yes, I was really happy that there are still wild boar alive in Hong Kong. Indeed re wild boars being pretty harmless and peaceful if not provoked. Also, as I told the lady in one of the photos, "You may be afraid of the wild boar but they are probably afraid of you!" :D

Walking can be very pleasurable in good weather as well as good exercise! What kind of wild animals are there in your part of the world?