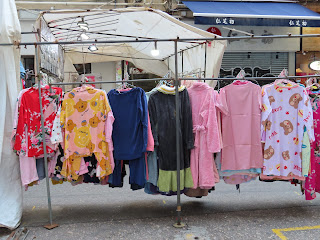 Clothes for sale at the Ladies Market in Mongkok, including
a "Tirger" that doesn't appear to be illegal (yet!)
Before anything else: the Focus on the Frontline photography exhibition I blogged about having gone to see over the weekend has been extended to January 30th.  (It was originally scheduled to close yesterday -- January 16th.)   For those who want to go check it out: The Hong Kong Press Photographers Association's photos are on display at the Form Society which is open daily (except for Tuesdays) from 12noon to 7pm.

After going to that exhibition in Sham Shui Po that afternoon, I went over to Mongkok to check out a Yellow Economic Circle pop up bazaar whose vendors were selling a range of items that included Taiwanese alcohol, handmade leather goods, handknit clothing, Minions merchandise, and snacks.  If truth be told, I thought the bazaar to be on the small and limited side, and ended up not buying anything at it.
On the way in, I spotted a police van parked nearby.  I chalked it down to the police doing that to intimidate "yellow" vendors and (potential) customers but didn't give it too much thought since, sadly, police vehicles as well as police officers have become a near ubiquitous presence on the streets of Hong Kong in recent years -- just one more thing that makes Hong Kong feel like a police state.
As it turns out, this evening came news that the police have raided the bazaar and arrested six individuals and, according to reporter Rachel Cheung, "arrested six people on suspicion of “committing acts with seditious intent” for publishing a book that recorded the events that happened in Hong Kong from June 2019 to February 2020. They accused the book of promoting the city's independence".  Honestly, this comes across as one more Streisand effect action on the part of the Hong Kong authorities; this because when I was at the bazaar, the offending tome didn't attract much interest on the part of any of the shoppers present at all!
AFP's Xinqi Su reports that "The 6 arrestees include 3 men and 3 women, aged 18 to 62. Their shops, relevant printing shops and their homes have been searched."  She also Tweeted that: "43 books and other “seditious items” were seized."  And for the record: "This is the largest single arrest made by the national security police since last April , when 4 men and 2 women aged 32 to 67, were arrested over “sedition” for clapping at the verdict hearing of the incitement case against #HKAlliance ex leader Chow Hang-tung."
On the same day as Hong Kong Chief Executive John Lee outlined his hopes and plans for the much reviled Article 23 of the Basic Law to be passed some time this year, or 2024 at the latest, the authorities served up reminders that they already have plenty of laws to suppress people with.  Specifically, in addition to the national security law that the Chinese government imposed on Hong Kong on June 30th, 2020, there's also the sedition law, described in a July 2022 Hong Kong Free Press explainer as  "one of Hong Kong’s legacies from the British colonial government, ...unused for over half a century until its revival in the aftermath of the 2019 extradition bill protests and unrest [and] increasingly used against purported security threats, although some critics see it as a deterrent to free speech and to legitimate criticism of the administration."
And speaking of the national security law: here's a periodic reminder that the trial involving the 47 pro-democracy politicians and activists arrested on February 28th, 2021, for allegedly breaking it has yet to begin.  Instead, we are still at the pre-trial review stage; with today seeing a shock development involving one of the 17 defendants who had indicated that they will plead not guilty deciding to plead guilty after all.
Why Mike Lam, best known as the co-owner (with his wife) of  Abouthai, a chain of grocery stores and supermarkets that specialises in selling Thai and "yellow" Hong Kong products, has decided to do so has not yet been revealed.  I must say though that I hope that the 16 defendants who continue to plead not guilty stay strong.  And for the record, they are: Cheung Tat-hung (AKA Tat Cheng), Clarisse Yeung, Michael Pang, Kalvin Ho, Lawrence Lau Wai-chung, Helena Wong, Sze Tak-loy, Gwyneth Ho, Raymond "Ray" Chan, Owen Chow, Lam Cheuk-ting, "Long Hair" Leung Kwok-hung, Ricky Or, Lee Yue-shun, Winnie Yu, and Gordon Ng; and yes, include a number of people I greatly respect.
Posted by YTSL at 11:45 PM