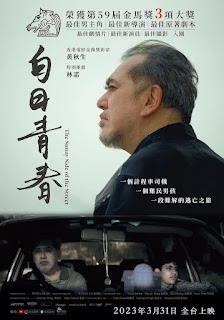 Its official cinema release date is March 31st
but there are preview screenings taking place already!
The Sunny Side of the Street (Hong Kong-Malaysia, 2022)
- Ray Lau Kok Rui, director and scriptwriter
- Starring: Anthony Wong Chau-sang, Sahal Zaman, Endy Chow, Inderjeet Singh
Although its Hong Kong cinematic run is scheduled to only begin in March of this year, quite a few of people had already heard of The Sunny Side of the Street even before 2023 came along.  This is because this understated drama about a far-from-model father and a less-than-model son was nominated for six Golden Horse Awards last November and ended up winning not only its debutant director-scriptwriter, Ray Lau Kok Rui, the best original screenplay and new director prizes but also its main star, Anthony Wong Chau-sang, his first ever Golden Horse best actor honors.
Upon viewing The Sunny Side of the Street, I do think that these accolades are well deserved.  Anthony Wong's assured portrayal of a taxi driver named Yat -- who has a crusty exterior but good heart -- gives this thoughtful film a strong emotional anchor.  At the same time, one can see how Ray Lau's script provides the character of Yat a psychological complexity that is revealed layer by layer the further along into the movie one goes.
Early on in this dramatic offering, it's shown that Yat is emotionally distant, even estranged, from his police officer son (portrayed by Endy Chow), whose wedding dinner he walks out of midway through.  The reasons why come to light in heartbreaking, yet never emotionally overwrought, scenes later in the movie.  Even more tragic is the reason why Yat comes to feel obligated to take care of, and do good, by a young refugee boy named Hassan (played by Sahal Zaman) whose father (sensitively essayed by Inderjeet Singh) was a lawyer in Pakistan before he and his long-suffering wife (played by Kiranjeet Gill) fled to Hong Kong some 10 years ago.
Born in Hong Kong, fluent in Cantonese as well as Urdu, and someone who's never been out of the New Territories (even to Kowloon), 10-year-old Hassan becomes a truant from school and turns to a life of petty crime; partly, one gets the sense, because no one -- not his parents, teachers, etc. -- seemed to realize how bad his eyesight was as well as because he came to fall in with the wrong crowd.  And it's not exactly like Yat -- whose physical health has been adversely by his alcoholic ways -- is the best influence in the world that Hassan could have.  But in the relatively short time that they know each other, the "taxi lo" is able to show the young boy new views (sometimes literally) and provide him with new experiences (some more positive than others).
Through The Sunny Side of the Street, Ray Lau Kok Rui also shows his film's audience new and/or alternative perspectives on Hong Kong.  A Malaysian immigrant to the city, he knows what it's like to not be a local -- and also how a good many Hong Kongers, even ones who are ethnic Chinese and native Cantonese speakers, are, in fact, fellow immigrants too.  And I don't think it's a coincidence that the vast majority, if not all, of the main and supporting characters in the movie turn out to not have been born in Hong Kong; irregardless of the color of their skin.
Speaking of which: it's impossible to not notice the prominent roles given to a number of non-ethnic Chinese individuals in The Sunny Side of the Street.  In recent years, there have been a number of Hong Kong films with such, including 2021's The Dishwasher Squad and Drifting, 2020's Hand-Rolled Cigarette, 2019's Memories to Choke On, Drinks to Wash Them Down (one of whose co-directors, Leung Ming-kai, is this film's cinematographer), and 2018's Still Human (one of whose stars was Anthony Wong) and Big Brother.  And I think it's fair to say that, admirably, few of these characters are one-dimensional stereotypes nor their particular cultural identity throwaway elements in the movies.
My sense is that this is the result of realizations latterly made about Hong Kong (multi-)cultural identity and community.  And I welcome this in terms of it helping to increase the richness of (portrayals of people in) Hong Kong cinema.  I wonder whether this will help The Sunny Side of the Street find an audience beyond Hong Kong -- including Ray Lau's native Malaysia; this even though there's no denying nevertheless that this cinematic work is, actually, a very Hong Kong movie: one shot and set entirely in Hong Kong, and using the filmmakers' knowledge of this part of the world to tell well a tale that is simultaneously local, inter-cultural, personal, (socio-culturally) political, timely and for the ages.
My rating for this film: 8.0
Posted by YTSL at 11:59 PM

Nice review. Anthony just gets better. This must have felt close to home.

Thanks. And yeah, it's been a long time since I saw a bad (or even mediocre/sleepwalking) Anthony Wong performance.

Re feeling close to home: Many of the Hong Kong movies in recent years have elements/messages that resonate for me. I do love that many Hong Kong filmmakers are now making films about and for people living here in Hong Kong (as opposed to targeting audiences in Mainland China or the West, etc.).