Michelle Yeoh -- from Malaysia to Golden Globes via Hong Kong 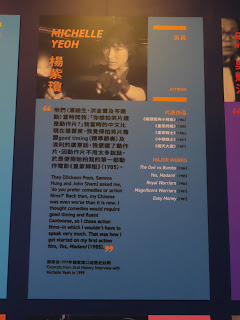 Michelle Yeoh panel that's part of the More Brilliance,
Still Different -- The D&B Story Redux exhibition
at the Hong Kong Film Archive
Let's talk about Michelle Yeoh.  The star of Everything Everywhere All At Once won the Golden Globes award for Best Actress in a Comedy or Musical Film today -- and not only did it prompt talk of an Oscar win to follow but heated efforts to proclaim both her Malaysian roots and Hong Kong connections by government figures as well as ordinary citizens.
In Malaysia, it seemed that she was being forgiven -- at least for the time being -- for her championing, then seeming disavowal, of disgraced prime minister Najib Abdul Razak.  And many a Malaysian delighted in trumpeting her being a fellow Malaysian who had brought honor to their country.  Meanwhile, Hong Kong Culture Secretary Kevin Yeung also extended congratulations to Michelle Yeoh on her Golden Globe triumph; a move that attracted derision on the part of many Hong Kongers.
The issue for many Hong Kongers appears to be that Kevin Yeung had claimed that Michelle Yeoh was a Hong Kong actor.  There are those who just simply will find fault and disagree with ANYTHING the Hong Kong government says or does.  Then there are those who will claim or appear to infer that one can't be both a Malaysian and a Hong Konger.  Or, at the very least, that one can no longer be associated with Hong Kong after one moves elsewhere -- despite having lived their previously for years, even decades: an assumption that I find problematic because, well, there are now quite a number of Hong Kongers living outside of Hong Kong.
For my part, I'm not entirely certain that Kevin Yeung had, in fact, claimed that Michelle Yeoh was a Hong Konger.  Also, I'm not entirely sure that Michelle Yeoh has never described herself as a Hong Kong actress because I have vague -- possibly erroneous, but they do exist -- memories of her doing that back when she was living and working in Hong Kong.
And here's the thing: Michelle Yeoh most definitely born in Malaysia and is a Malaysian citizen.  But she's actually never appeared in a Malaysian movie -- or, as far as I can recall, ever played a Malaysian in a movie!
On the other hand, she's played Hong Kongers in many a (Hong Kong) movie.  And Hong Kong's film industry is definitely that where she was trained, got her breaks (in some cases, literally!) and became a star.  Long before Hollywood came calling and she started being seen as an international Asian megastar.
For my part, because I first saw her in Hong Kong movies, I do tend to regard her a Hong Kong film actress -- even while also being very aware that she was a Malaysian citizen -- in that she is a star of Hong Kong cinema.  And yes, that's so to this today; not least because I don't feel that she's completely said goodbye to the Hong Kong phase of her career.  It was just in 2018, after all, that I most recently viewed her in a Hong Kong movie: Yuen Wo-ping's Master Z: The Ip Man Legacy; which, for the record, came out in the same year as -- but months after -- Crazy Rich Asians.
But is Michelle Yeoh a Hong Konger?  From what I've read, she no longer maintains a home in Hong Kong.  And it's possible that she no longer has Hong Kong permanent residency; but, then again, she might.  Something else that matters a lot to many Hong Kongers is that she has never made any statements about Hong Kong's political situation.  (But, then, she might have decided not to do so based on how she got burnt over the ones she made in Malaysia!)
Still, I think it's safe to say that Michelle Yeoh still has personal and professional connections and ties in, and to, Hong Kong.  She's spent the better part of her life her, after all; and far more of her adult life here than in Malaysia, in fact.  And I think it's also fair to say that she is/was a major star of Hong Kong cinema.
So, yes, a part of me hopes -- though doesn't expects -- that should she win the Best Actress Oscar this year, that she'll mention, many even thank, Hong Kong cinema in her acceptance speech, even if not Hong Kong itself.  As a fellow Malaysian Tweeted (back in April 2012!):  "Michelle [Y]eoh warga Malaysia. Dan menyinar di Hong Kong".  Put in English: "Michelle Yeoh is a Malaysian citizen.  And shines/shone in Hong Kong".
Posted by YTSL at 11:59 PM

Was that the first time you saw Michelle Yeoh on TV -- and have you ever seen any of her films?

As an old time HK film fan, what I find funny though also interesting is that many people are discovering her early films - Yes Madam, Royal Warriors, Magnificent Warriors - thanks to Blue Rays from these boutique companies and being wowed by them. I was surprised she won the Golden Globe - she has barely been mentioned to be in the running for the Oscar but here is hoping.

Michelle Yeoh HAS been mentioned a lot as a Oscar contender! This not least because she's already won a slew of awards this awards season (including, say, the National Board of Review Best Actress prize)!