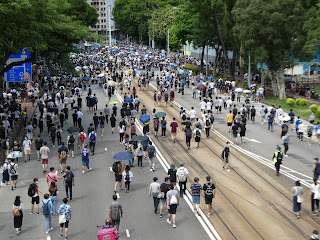 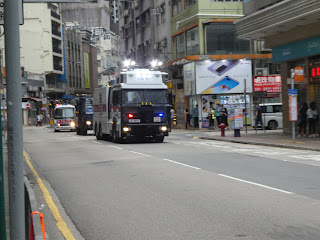 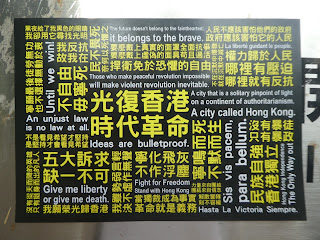 A small sticker with so many messages
(and in multiple languages to boot!)


Eight years ago today, I took part in a legal protest march on the anniversary of the establishment of the Hong Kong Special Adminstrative Region and -- the reason why I went out on the street that day -- the day that the man who became Chief Executive by winning 689 votes from the roughly 1,200 strong selection committee assumed office.  This year, however, the police refused to give a letter of no objection for the annual July 1st pro-democracy march.  Still, as I was making my way over to meet a couple of friends in Causeway Bay this afternoon, I was informed by one of them that there were people marching past her as she made her way to our agreed-upon meeting point!


Although another friend and I had little problem getting to that meeting point, the friend who had to cover a longer distance to get over there reported that she was finding roads she'd otherwise be using being blocked off by riot police.  So the friend I was already with and I decided to go meet this other friend at an alternative place that was accessible to all of us; over the course of which I saw hundreds of other people deciding to literally take to the streets after being cleared out of Causeway Bay by the riot police!


Put another way: the police had banned a protest march from taking place on July 1st but because they refused people access to large swathes of Causeway Bay and also kept on telling people to stop gathering and move away, they caused people to start marching en masse through and out of Causeway Bay to various points to the east and west of it!  And with seemingly insufficient protestors to target and attack, they got to turning their attention to, and targeting, journalists on the scene with such as pepper spray and also the noxious spray from their water cannons (two of which I spotted over the course of the afternoon; all three of which were apparently stationed today on Hong Kong Island)!


For the record: the police targeted their water cannon barrage at journalists on more than one occasion.  And one of them was so terrible that it needs to be seen from more than one angle to believe -- and also appreciate that, after the journalist in question was knocked down by the water cannon spray, many people rushed to the unfortunate fellow's rescue, with scant regard for their own safety.  (This is something I've long appreciated about Hong Kong people involved with protests; this particularly after I ended up inhaling far more tear gas than I clearly was comfortable with one afternoon last year while attempting to make my way home!)

Lest it be thought though that all of the tens of thousands of protestors who turned up to show their defiance and continued quest for justice on the first full day of Hong Kong's second handover to China managed to get off scott free, here's pointing out that more than 300 people have been arrested; some for dubious crimes such as having Taiwan flags in their possession, having stickers with slogans such as "Hong Kong independence" on them, waving a "Hong Kong independence" flag (this by the youngest person arrested today -- aged just 15), and walking away from the police?  In addition, even people queueing for bubble tea were not spared by the police: imagine being pepper sprayed because you decided to choose to get a drink at shops that people with trigger-happy fingers didn't like!

With scenes like these taking place in open view of cameras and apparent disregard of world opinion, small wonder then that many in the world (including four major Japanese newspapers) are trumpeting the death of Hong Kong today.  And yet, as one Hong Konger phrased it, "Hong Kong is dead but the Hong Kong people are alive".  And maybe, just maybe, the world might finally be getting it: that people in Hong Kong haven't been crying wolf and are completely serious about Hong Kong's plight (as well as really, truly love it).
Posted by YTSL at 11:56 PM

I don't know if our local law enforcement has water cannon truck. Last time I saw out SWAT truck it had flat tire.

Count yourself lucky that your local law enforcement is that way!

I am tempted to wear the 7Up Tee Shirt that I bought back in 2000 while I was in Los Angeles. If someone is not happy about me I will just turn my back and let them have it. The softdrink company had had a compaign back then using the slogan Make 7-Up Yours. But I don't believe not too many non-native speakers know of the play of words of that.

You mean the play of words with regards to the number 7 that also makes people laugh at Carrie Lam's 777 association?

Not quite. If you were in the States twenty years ago you may have seen this on TV:

The first time I saw it, I fell out of my chair. That Tee shirt was on screen to.

Hah! I was in the US 20 years ago but can't actually recall seeing that on TV. Thanks for sharing! :D