Yesterday was one of those June days when memories came flooding back, much of it sad.  Unlike June 4th though, I harked back to events that took place not 33 years ago but just 3 years ago, and in Hong Kong rather than over in Mainland China.  Like the Tiananmen Square Massacre though, what happened on June 12th, 2019, isn't so much history as the start of certain developments (specifically, repressions) that continue to this day.  And I'm grateful to people like Samuel Bickett and the woman who goes by Goose Lee over on Twitter for sharing their accounts of what transpired over in Admiralty on June 12th, 2019, to help counter attempts by the powers that be to gaslight us.
With the weather gods obliging by granting Hong Kong a rare rainless day today (breaking a streak of rainy days that's lasted so long that I can't remember when was the last day before this one that I didn't see rain falling), I decided to go for a mental and spiritual cleanse by way of a hike that started at Victoria Gap and involved going along the full Peak Circuit before scooting down along Pok Fu Lam Reservoir Road to Pok Fu Lam Road.
Although I've gone on these trails before, today's hike offered up some experiences that were different from the norm in that the conditions were on the foggy side and with the winds adding to an interesting soundscape that also took in such as that made by those birds that have stayed around for the summer and seasonal cicadas.  There also was a sense that I was walking in the clouds (something which made conditions very humid).  All in all, it often felt like I wasn't in Hong Kong proper!  Incidentally, something that was uncommon with regards to Hong Kong today: the amount of water gushing down the hill streams that made for a number of pretty cool waterfall spottings along the way (as you'll see lower down this post)! :) 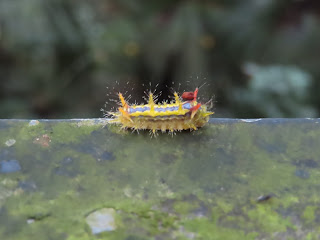 Just one of the many interesting critters spotted on today's hike
(I'm guessing that this is a caterpillar!) 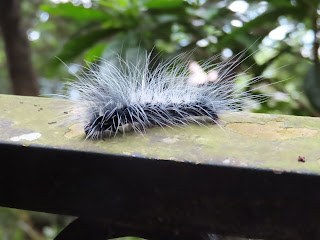 A considerably larger and hairier caterpillar -- and more
common (since I spotted three of these on today's hike!) 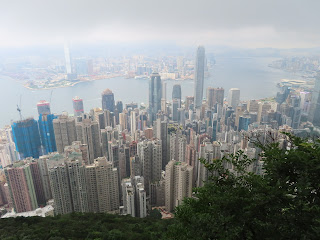 Definitely not the clearest version of the famous
"View from the Peak" that I've been treated to over the years! 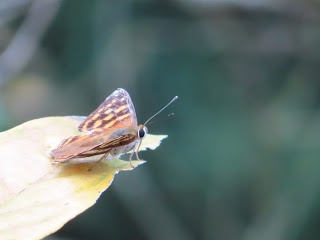 A butterfly with the kind of eyes that I guess gave
meaning to the term "bug eyed"! :D 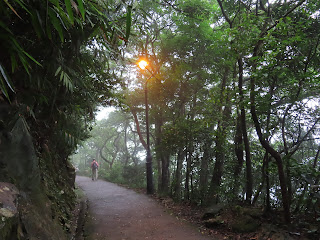 In better weather, it'd not be dark (and the lights on)
at the time of the day that I went on this hike! 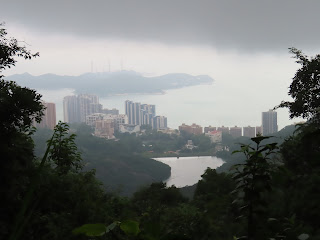 Much of Hong Kong was literally under a big
dark cloud (or more!) 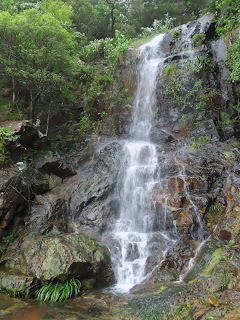 One benefit of hiking after a rainy spell: I've never seen
this waterfall on Harlech Road look so full before! 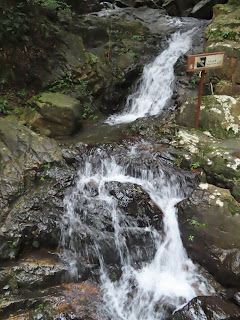 Ditto re this waterfall on Pok Fu Lam Reservoir Road!
Posted by YTSL at 11:18 PM

The 'hairy' ones are likely Moths. If you right click the photos respectively and select 'search image with Google Lens', you should be able to find some reference. You still ahve to go through the results and see which might be the likely one though.

You nee to use Google Chrome for search image with Google Lens by right clicking an image on any website without physically uploading the image. It's not a must though. But using Google Chrome may sometimes has such convenience.

Or, use your android phone. There is a 'Google Lens' icon on the search space. Touch 'Lens' and point the camera frame to the image you want to look-up.

Aaah, as I am not a user of Google Chrome. Also, my Android phone remains strictly for the Leave Home Safe app. Am NOT using it for anything else!

Sorry, I so took it for granted..... Anyway, for alternate web browser on any Operating Systems, you may still access Image search by Google at https://images.google.com Have fun.

Yeah, I think it's hard for many people to remember/realize that there still are folks like me who still don't like/regularly use smartphones, preferring computers in case. And yes, I do know about Google Images. :D