In my first year of hiking as well as living in Hong Kong, I was told by a local friend that one reason why hiking was such a big thing in the Big Lychee was that people were encouraged to do so during and after the SARS epidemic hit the city in 2003.  For one thing, hiking is good exercise.  For another, going out into the country parks allowed people to venture outdoors without being in crowded spaces.

While out hiking yesterday (in the midst of the Wuhan pneumonia epidemic whose death toll has now gone up to 41 -- all in Mainland China -- and resulted in five confirmed cases in Hong Kong thus far), I got to recalling that conversation.  But while I do hike for exercise and also to spend time in uncrowded parts of Hong Kong, yesterday's excursion also was prompted by my having a "tradition" of spending major holidays partly out hiking; with my going hiking on Chinese New Year Eve this year (rather than the first day of the Lunar New Year, like is my usual practice) because the weather for today was predicted to be less ideal than the day before.

I admit: I didn't feel in that much of a festive mood before the hike.  But after nature worked its magic once more (and a great conversation was had over the course of the excursion with my tramping companion), my spirits were lifted.  And after catching sight of those beautiful pink flowers that signal that Chinese New Year is upon us -- or, at the very least, nigh -- I really did come away realizing that, ongoing protests, government intransigence, Wuhan coronavirus threat and all, the lunar new year really was going to happen and I should try to be happy for at least some part of it.  (So Kung Hei Fat Choi (to Cantonese speakers), Keong Hee Huat Chye (to Hokkien speakers), Gong Xi Fa Cai (to Mandarin speakers), and here's wishing a happy and healthy Lunar New Year to these blog's readers!) 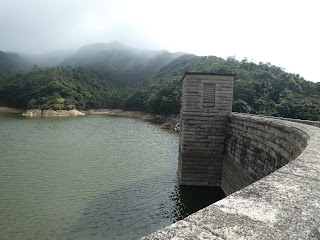 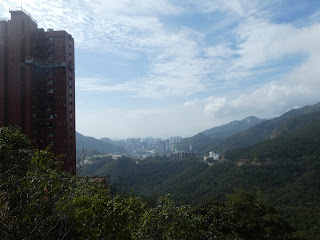 A look in another direction showed beautiful clear skies
and super high visibility for miles though! 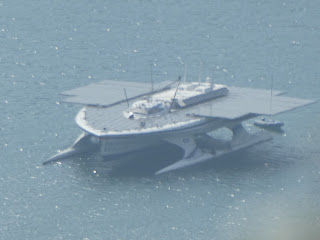 Spotted in the distance: a sea vessel that looked
like something out of a sci fi movie! 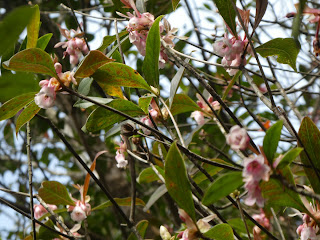 Chinese New Year flowers galore hanging over
as well as on the side of the hiking trail! 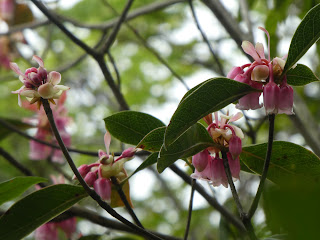 A more close-up shot of some of my favorite wild flowers ever :) 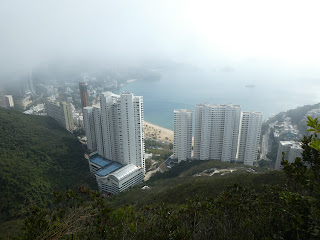 This is not to say that there aren't some splendid views
to be had along the Tsz Lo Lan Shan Path, with the mist
adding some magic to familiar sights down in Repulse Bay 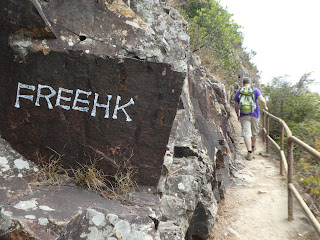 Not the first protest graffiti I've seen on a hiking trail --
but maybe the first not directed against Leung Chun-ying! 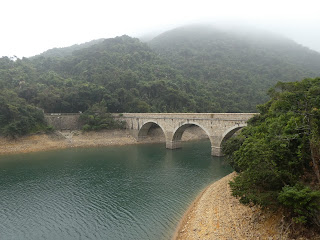 Rather than take the Tsz Lo Lan Shan Path all the way,
we diverted at Tsin Shui Wai Au over to a trail that took us
past a now very familiar stone bridge over to Tai Tam Road :)
Posted by YTSL at 11:16 PM