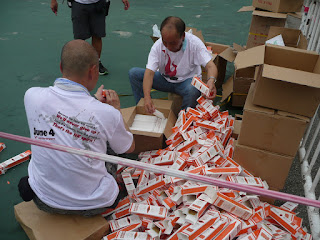 Getting for the candlelight vigil back on June 4th, 2013 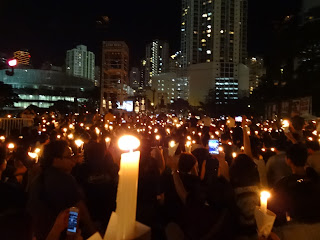 At Victoria Park on June 4th, 2014
Hong Kong's Wuhan coronavirus statistics underwent some revisions yesterday, with five recently reported cases being reclassified as imported cases rather than local transmissions and one local case -- involving a four year old boy whose had tested negative several times after first testing positive, to the befuddlement of medical experts -- being suspected to have been infected back in January rather than in the past month or so.  In the wake of the reclassifications of those six cases, Hong Kong was adjudged to have gone for 28 days without a single new local case.  Put another way: the territory's fourth coronavirus wave has ended -- and, for the record, Hong Kong had yet another day of zero new cases again today!
If only we could say the same of the political persecution that Hong Kong has been subjected to for seemingly forever.  Instead, there's no end in sight of this.  If nothing else, the authorities appear to be doubling down on their efforts in the wake of little, if any, negative international reaction to their doing so.  As Exhibit A, consider that there are reports that when the trial of the 47 people accused of subversion under China's security law for Hong Kong for having taken part in last year's democratic primaries finally begins tomorrow, the prosecutors will apply to move the case from the District Court, where sentences are limited to seven years, to the High Court, where they would face life imprisonment.
And then there's Exhibit B in the form of the now outlawed June 4th candlelight vigil at Victoria Park (which had taken place for 30 years without incident until last year).  Rather than consider lifting their ban of this year's vigil, which officially was enacted as a "social distancing" measure, the authorities have now (also) threatened those who go to Victoria Park to remember the Tiananmen Square Massacre on the 32nd annivesary of the killing of thousands of civilians by the People's Liberation Army with up to five years imprisonment.

The following is a sentence from the statement issued by Hong Kong's Security Bureau yesterday: "If anyone attempts to challenge the law, including the Prohibition on Group Gathering, Public Order Ordinance, Hong Kong National Security Law, etc., the Police will deal with it seriously in accordance with the law.  Whether or not the event involves violence is irrelevant as far as the authorities are concerned -- and should it not be clear, in the 30 years that the candlelight vigil has been held, it has uniformly been peaceful in nature.

As a friend remarked, it often feels like we are living in George Orwell's 1984 in Hong Kong circa 2020-2021.  And the authorities -- behind whom the Chinese Communist Party looms -- really do appear like the party in that dystopian novel in believing the following: “‘Who controls the past... controls the future: who controls the present controls the past.’”

There is a general sense that the Chinese Communist Party has largely succeeded in making people living in Mainland China forget, not just deny, that the Tiananmen Square Massacre happened.  In Louisa Lim's The People's Republic of Amnesia: Tiananmen Revisited, a Mainland Chinese man visiting Hong Kong is quoted as telling her that "the Chinese government is very good at covering things up and cheating people" (2014:84).

Incidentally, Lim had met the individual in question at the June 4th Memorial Museum, which reopened today after temporarily closing its doors because of the pandemic.  Those who run the institution are among the many Hong Kongers unwilling to take part in what Lim has termed "the great forgetting" that has taken place on the other side of the Hong Kong-Mainland China border.

Something that Lim makes clear in her book is that: "The "forgetting" that has engulfed China is not just enforced from above; the people themselves have colluded in this amnesia and embraced it.  Forgetting is a survival mechanism, almost second nature.  China's people have learned to avert their eyes and minds from anything unpleasant, allowing their brains to be imprinted with false memories -- or allowing the real memories to be erased -- for the sake of convenience" (2014:211).

In yet another way that distinguishes from the Mainland Chinese, Hong Kongers, on the other hand, remember and are determined to never forget.  6/4.  6/12.  7/21.  8/31.  Etc.  Indeed, in trying so hard to make people forget and/or keep them away from Victoria Park on June 4th, they have only got people thinking more about that date and how to commemorate it!

A personal example: In previous years, I would only really start thinking about the Tiananmen Square Massacre on its actual anniversary.  This year, I've been thinking about it for some time now -- thanks in no small part to the efforts of the authorities to punish key individuals who had gone to Victoria Park on June 4th last year as well as ensure that people won't be going there this upcoming June 4th.  And whereas I usually just wrote about the candlelight vigil for the victims of Tiananmen Square Massacre once annually, I've already done so more than once already this week.  In short: rather than make me forget, they've got me more fixated about, and determined to not forget, it than usual!
Posted by YTSL at 11:58 PM