Life and injustice in a Hong Kong that's increasingly feeling like a sad, surreal joke 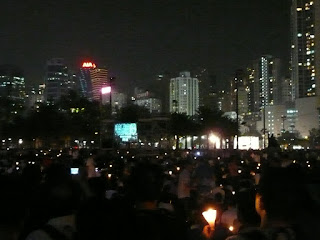 Scene at Victoria Park on the evening of June 4th, 2009 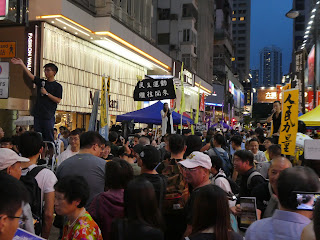 Joshua Wong and Ray Chan among the people standing tall
on the way to Victoria Park on June 4th, 2018
Last Friday afternoon, Joshua Wong, Lester Shum, Jannelle Leung and Tiffany Yuen pleaded guilty to having participated in an "unauthorized" assembly at Victoria Park on June 4th last year.  Today, sentences were passed on the quartet by judge Stanley Chan.  Joshua Wong was slapped with a 10 month jail sentence (which will run after rather than concurrently with the two other prison sentences he's already been handed out), district councillor -- and Umbrella Movement leader -- Lester Shum was given a 6 month sentence while the two female district councillors each received four months jail time.
In handing out the sentences, Judge Chan alleged that there had been a potential risk of violence breaking out at the event.  I'm not sure what planet he's on but prior to last year, the June 4th candlelight vigils had taken place minus any violent incidents for 30 years.  We're talking, after all, of an event where people go to mourn and remember, and are seated in one spot for the most part.
Each time that I've been to the June 4th candlelight vigil at Victoria Park, I've been struck by how moving -- and, also, peaceful -- the whole affair is.  I remember one year, there was a large bang midway through the proceedings and two American friends of mine then residing in Hong Kong who had decided to accompany me to Victoria Park that year had freaked out, thinking that a gun had been fired.  I had to tell them to calm down and that what had happened was that something had (accidentally) fallen down close to the microphone -- and, also, to not worry about anything untoward happening that evening!
Each time that I was at the June 4th vigil in Victoria Park, I also felt very proud of Hong Kong: both because of the tens -- even, in some years, hundreds -- of thousands of people who showed up to pay their respect to, and seek justice for, those people who were massacred over in Mainland China on June 4th, 1989, and also because the Big Lychee was the only place in China where this day was allowed to be commemorated.  So imagine how tragic it feels to live in a Hong Kong so changed now that the June 4th candlelight vigil no longer has been approved to take place by the authorities and people are now being jailed for going to Victoria Park to light a candle and mourn on June 4th.
Another shocking court decision delivered in recent days that would seem farcical, if it weren't so sad, involves the conviction yesterday of three individuals to at least four years imprisonment for rioting even though the presiding judge acknowledged there was no evidence they had any actual role in the riots alleged to take place in Tsuen Wan on October 1st, 2019.  For some years now, Hong Kong judges have handed down some really strange decisions.  (Remember the 2015 case involving a woman being convicted of having assaulted a police officer with her breasts during a pro-democracy protest?!)  But, lately, the Hong Kong legal system really seems to have gone off the rails; this especially -- but not exclusively -- with regards to national security law cases.
Even when there's something for lovers of freedom in Hong Kong to celebrate, there are elements of farce that cause you to also want to laugh.  Take, for example, the news today that Radio Television Hong Kong (RTHK)'s Yuen Long mob attack episode that Bao Choy worked on has been honored once more -- this time at the Human Rights Press Awards, and Nabela Qoser too!  RTHK English News's sassy Tweet writer couldn't fail to see the irony of it all and thus was moved to make the following observation: "#RTHK picks up more prizes, despite management's best efforts. Bao Choy and Nabela Qoser, who've both been given their marching orders, are recognised in this year's Human Rights Press Awards, as is @rthk_enews"!
Adding to the feeling that life in contemporary Hong Kong can be crazily surreal, even downright ridiculous: today also saw police officers said to be from said to be from the national security unit go and cordon off the Tsuen Wan branch of the Chickeeduck clothing store that had opened two days earlier.  Store owner Herbert Chow later told reporters that the police had entered the store with a court issued warrant and warned him not to sell or display any products that violate the security law, but refused to tell him -- after he specifically asked them -- whether any of his products had in fact breached the law.
Chow also reported that they didn't seize anything and thus concluded they were just trying to scare him.  To judge from his reactions, they didn't succeed -- and neither did they put off the store's customers!  In fact, to judge from social media reactions and the AbouThai example from last month, it looks like the Hong Kong police just might have provided Chickeeduck with the best advertising campaign money can't buy!
Posted by YTSL at 11:52 PM