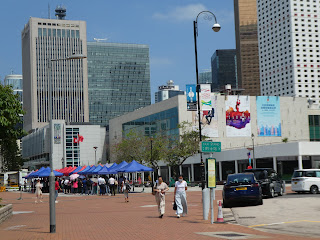 What now passes for a normal scene in Hong Kong, complete
with people waiting in line to be tested for the Wuhan coronavirus
and a large government propaganda poster on prominent display 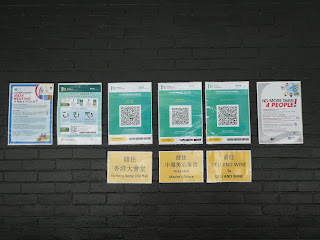 Government tracking and social distancing regulations
currently being effected
First, an update about Democratic party stalwart, Wu Chi-wai: On Friday, the High Court overturned the decision of the Correctional Services Department to deny his request to be temporarily let out of custody in order to attend his father's funeral.  While this was seen by many as common sense and compassion being allowed to prevail, it ought to be noted that strict conditions were set for the whole affair and, in the end, Wu was only allowed to be at his father's funeral for a grand total of 37 minutes on Saturday morning.
To be sure, Wu's wife has gone on record as stating that her husband had managed to perform his duty as a son in that short time that he was back with his family.  And even though they weren't allowed to attend the funeral, some of Wu's supporters were able to catch sight of him and shout out to him to ga yau before he went back into custody (while awaiting his security law trial).  So thank goodness for small mercies and all that. Still, writer Ilaria Maria Sala's Tweet on the subject is worth sharing: "His crime was to take part in primary polls. He has spent four months in jail without trial and has been denied bail. The “humanitarian” level of giving him half an hour without police for his father funeral is a pretty low bar."
Another update: The deadline that the Hong Kong government set for all 370,000 or so domestic workers in Hong Kong to undergo tests for the Wuhan coronavirus will pass just a few minutes from now, and it does seem that the majority of them have indeed complied with the test order.  This was possible only through considerable sacrifice on the part of the domestic workers, many of whom gave up hours of their free time over the past two weekends to stand in long lines for hours, in bright sunshine and also in the rain, to undergo those tests.
And while talk seems to have faded about requiring the domestic workers to all be vaccinated against the Wuhan coronavirus, we definitely should continue to beat out the message that the Hong Kong government's anti-coronavirus policies are discriminatory in nature, and tend to place politics over science.  And it's not just the domestic workers (the majority of whom are darker-skinned women from the Phillippines and Indonesia) who have suffered unduly as a result of these discriminatory, politicized policies.
Remember Hong Kong's first ever -- but, sadly, far from last -- pandemic lockdown "happening" to be in an area whose populace consist for the most part of less financially well-off individuals and also includes a significant percentage of ethnic minorities?  And now it's also been discovered that, for all of the government wanting so much for Hong Kongers to get vaccinated against the Wuhan coronavirus, the territory's some 13,000 strong refugee and asylum-seeker population are barred from availing themselves of the free Sinovac and BioNTech vaccines that the Hong Kong government is offering to the general populace!
Then there's the matter of the arrest yesterday of the couple who were the first people in Hong Kong to have been diagnosed with a variant of the Wuhan coronavirus for providing misleading and insufficient information to health officials.  While this is not something I intrinsically object to, I can't help but wonder whether their arrests would have happened if they were not ethnic minorities.  Put another way: how come we haven't heard of the arrests of any of the ethnic Chinese dancing tai tais who caused the start of Hong Kong's fourth coronavirus wave, particularly those who were accused of obscuring or even downright lying about their close contacts.
Honestly, it can feel miraculous at times that Hong Kong is not in a worse position as far as the pandemic is concerned.  And for the record: We had a total of 1 new case today; and it was an imported, rather than locally transmitted, one for the second day in a row!
Posted by YTSL at 11:05 PM

Simply put, they may have lost their common sense already.

Alas, I have to agree with you there!