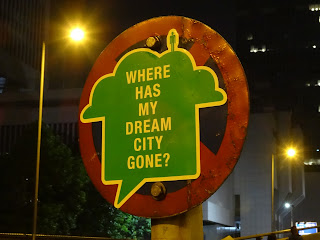 Seen in 2014, but even more pertinent now than then 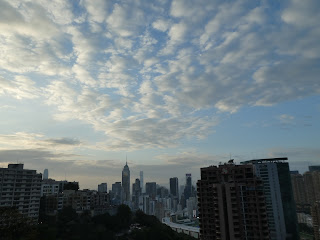 And yet, on a good day, Hong Kong can still seem
so beautiful, even wondrous :S

After pleading guilty on Monday to organizing an "unauthorized assembly" on October 1st, 2019, Civil Human Rights Front convenor Figo Chan, League of Social Democrats secretary-general Avery Ng, former Democratic Party chairmen Albert Ho and Yeung Sum, Democratic Party executive council member Sin Chung-kai and the Hong Kong Alliance in Support of Patriotic Democratic Movements of China's secretary, Richard Tsoi, were granted bail and thus allowed to walk out of the court as free men.  Just one day later, however, their bail was revoked by judge Amanda Woodcock.
Thus it is that today, the eighth day of the fourth month of the Chinese lunar calendar -- Buddha's birthday, and therefore a public holiday in the Big Lychee-- sees six more pro-democracy activists behind bars in Hong Kong.  (For those who've not been keeping track: the four others who also pleaded guilty in this case -- media mogul Jimmy Lai, and veteran activists "Long Hair" Leung Kwok-hung, Cyd Ho and Leung Cheuk-yan -- are already serving time in prison for other, similar "offences".)
A friend who was present in the court yesterday told me that there were shouts of shock at this decision as the expectation had been that they this sextet would be free until their sentencing on May 28th.  At the same time though, the activists concerned clearly are expecting to be slapped with jail time -- with Figo Chan having told Lee Cheuk-yan on Monday that “I will join you soon.” and having already prepared for prison for some time now.
At just 25 years of age, Figo Chan is the youngest of the 10 individuals who pleaded guilty to having organised the demonstration on the 70th birthday of the People's Republic of China which saw tens of thousands of protesters take to the streetsof Hong Kong, as is supposed to be their right under Hong Kong's Basic Law (see in particular Article 27, which states that "Hong Kong residents shall have freedom of speech, of the press and of publication; freedom of association, of assembly, of procession and of demonstration; and the right and freedom to form and join trade unions; and to strike").  For the record: the oldest are Yeung Sam and Jimmy Lai, both of whom are 73 years old.  So, yes, the Hong Kong government is imprisoning generations of Hong Kong pro-democracy activists, young and old.
For those without a subscription to the Washington Post, its Southeast Asia and Hong Kong bureau chief, Shibani Mahtani has a Twitter thread about its article on Figo Chan.  But because it really is a good one, here's sharing other snippets of it here.  Firstly, here's this for context:

Hong Kong’s jails are filling up with the likes of [Figo] Chan. Some 2,500 people have undergone or are undergoing court proceedings in connection with the protests, which amounted to the biggest rebuke of Beijing’s rule on Chinese soil in decades. The defendants range from prominent activists to unknowns.

Chan’s case underscores the city’s political shift. He is a leader of the Civil Human Rights Front (CHRF), a civil society group that led the largest and most peaceful marches during 2019 — often with permits from the police — and which long operated with the authorities’ blessing. Now, in addition to prosecuting Chan and other front leaders, police have suggested the group might be illegal and have begun investigating its funding — a probable precursor to shutting it down.

And this is to help give a sense of the personality of this 25 year old and the caliber of individual that the Hong Kong authorities have decided are their enemy:-

Chan was 16 when he started attending Hong Kong’s annual June 4 vigil to commemorate the 1989 Tiananmen Square massacre. Straight-talking and unafraid to criticize his political allies, he caught the eye of Raphael Wong, a member of the League of Social Democrats, a left-leaning pro-democracy party, who recruited Chan as a party member in 2015. Chan, then in his freshman year at a vocational institute, finished the application at a bar over drinks with Wong, who described him as “quick-witted” and mature beyond his years...

He admits that he fears getting the maximum sentence for all his charges — a decade in prison. [But] “I think I would still relive this life,” he said. “I didn’t ask anyone to do anything high-risk, just to join rallies and peaceful civil disobedience movements, like activists in Hong Kong always did.”

Prison, he said, will be an opportunity to reflect on the protest movement. He plans to “finally slow down and have time” to jot down his thoughts, and assess what Hong Kong has gained or lost from resisting Beijing’s encroachment...

[On Monday, a]s correctional officers escorted Chan from the court, he shouted for Hong Kongers to “persist” before he disappeared from view as he was taken to a prison van.

After being transported to Lai Chi Kok Detention Centre, Figo Chan and the five other newly remanded prisoners were filmed disembarking from the prison van.  Check out the still photo of him: still defiant, he's got the "five demands, not one less" hand signs up for the camera to record for posterity.