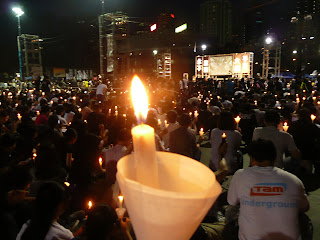 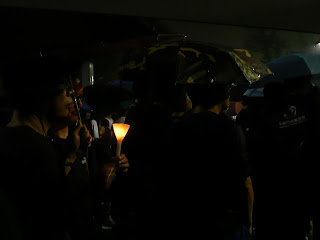 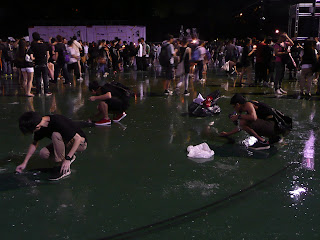 As I walked into Victoria Park earlier this evening, I looked at the crowd around me and worried aloud to the friend I was with that there were going to be fewer people at the event to commemorate the tragedy that occurred in the summer of 1989 than on previous June 4ths.  Indeed, so small was the crowd at around 6.30pm that we were able to find space to park ourselves on the second football pitch away from the main stage.

But one hour later, all the football pitches were filled with people -- young and old, male and female, many of them wearing black or white.  And just before the heavens opened and poured its tears on us, an announcement had been made that one half of the grassy area in the park also had been filled with people there to declare to the world that Hong Kong remembers the events that happened in Beijing and elsewhere in China 24 years ago.


For the past few days, my friend and I had worried about whether there'd be rain as forecast for this evening.  At the beginning of the candlelight vigil, we were hopeful that all the rain for the day had already poured down this morning.  Alas, it was not to be.  Worse, we aren't talking about a shower or even ordinary downpour but a veritable deluge that turned the very ground we had been sitting on into a stream and was so  loud that we had problems hearing each other speak, never mind the event organizers.


For what seemed like an eternity, we stood along with thousands of other increasingly drenched people in the pouring rain.  At some point, we followed the lead of others in deciding that we had better move on to someplace dry.  This, of course, meant leaving Victoria Park and the candlelight vigil.  And it was with a sense of guilt that I did so.

After a quick dinner at a nearby restaurant, I ventured out to find that the rain was now just a drizzle -- so decided that I might as well go back to Victoria Park.  There I found some hardy souls who appeared to have stayed throughout -- and the loudspeakers working again (but not the video, so the big screen that had been temporarily erected for the event was now blank).


What with music blaring, there seemed an almost festive air to the place -- an optimism that "We shall overcome", if you will.  Shortly afterwards, the organizers thanked the people who had participated this evening and brought tonight's vigil officially to a close.

Thus it was that an event that had begun promisingly and looked like it had been disastrously brought to a premature halt seemed to have been brought to a surprisingly good-natured conclusion for the year -- with the likes of me resolving that, come rain or shine, we will be back again next year to ensure that the message is sent that We Do Remember what happened on June 4, 1989 and that we are determined to make sure that people who don't remember it still will know what happened on that day.
Posted by YTSL at 11:11 PM

Thanks for being there, and sharing.

You're welcome. And thanks for reading.

ooh I hate spiders. But I do like hiking.

I think you meant your comments for my "A hike with rain and spider spottings" entry -- but thanks for them anyway. :)