Upon learning that the June 4th Museum has recently reopened, I decided to kick of this week of remembrance -- and month full of commemorative dates for Hong Kongers -- by returning to the only museum I visited in 2020.  Bookings are currently being taken for visits to it* on its blog but I decided to chance it and try to walk in -- something which I was indeed able to do this afternoon.
Minutes after I entered the June 4th Museum, a team of about five officers from the Food and Environmental Hygiene Department (FEHD) dropped by -- presumably to make sure that the appropriate social distancing measures were being observed in the locale that did have a good number of visitors (but still was by no means as crowded as, say, many an MTR train).  As I exited the building where the museum is located less than an hour after I had entered it, I spotted the same FEHD officers making their way back in there.
In this current clime, I can't help but think that the authorities are determined to find any reason they can to shut the museum down.*  I, of course, hope they don't -- and also that the FEHD officers who were doing the rounds, many of whom were on the young side, did look around the place and check out some of the exhibits.  If so, they probably would have learned a thing or two about what happened in China back in the summer of 1989 and how it connects with what happened in Hong Kong in 2019 and is continuing to take place up to today... 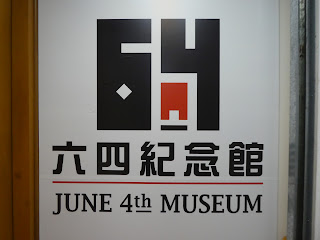 Hong Kong is home to the only museum in the world
dedicated to commemorating, and educating
people about, the Tiananmen Square Massacre 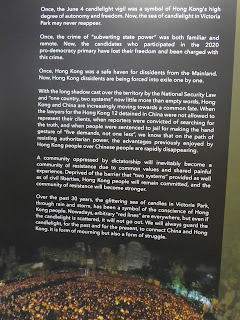 The English language section of the introductory panel for
the current special exhibition (entitled: A Common Fate,
a Shared Struggle: Photo Exhibition of [the]
1989 Democracy Movement and Hong Kong
(As with all the pics in this post, click to view an enlarged version) 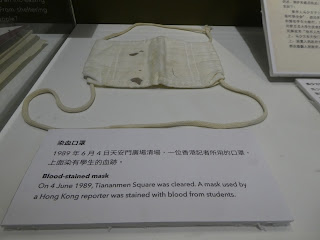 More than just photographs are on exhibit at the museum,
actually -- including this blood-stained mask worn by
a Hong Kong reporter in Beijng on June 4th, 1989 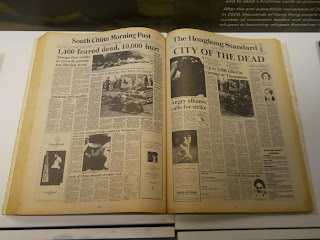 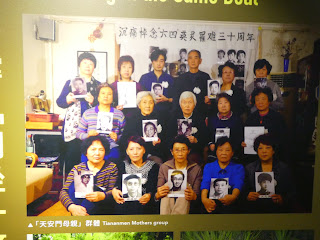 Members of the Tianamen Mothers group, whose courage
is immense, and who truly deserve our respect and support 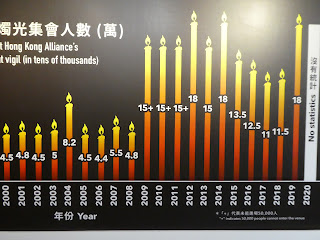 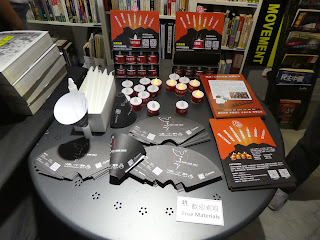 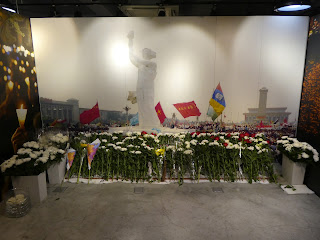 Especially this year, this museum functions as a place
for people to mourn as well as learn and remember*
*Update: or, rather, did.  This morning, the museum closed its doors until further notice after being accused of operating as an unlicensed place of public entertainment.  :(
Posted by YTSL at 10:21 PM