The authorities come gunning again for Jimmy Lai and Apple Daily, who once more could do with Hong Kongers' support 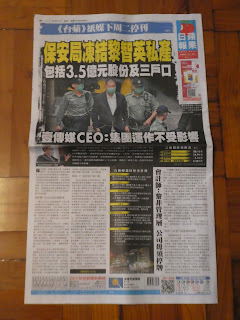 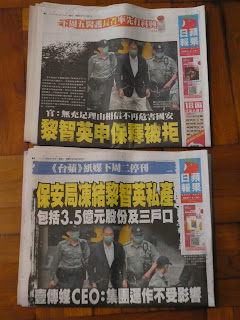 Should the photo seem familiar, it's because it also appeared
on the front page of the February 19th issue of the newspaper
"Apple Daily will be published as usual tomorrow. Don’t forget to get a copy,” the paper's editor-in-chief, Chan Pui-man, posted on social media last night.  This assurance came in the wake of an announcement by the authorities yesterday evening that assets belonging to Apple Daily's founder, Jimmy Lai (including 71.26 per cent of voting shares in the firm which owns the pro-democracy tabloid) had been frozen.
As an Apple Daily article reporting the news noted: "This is believed to be the first use of seizure powers granted to authorities under Article 43 of the national security law, which Beijing imposed on Hong Kong last June, to effectively criminalize the city’s once-tolerated dissenting voices."  And should a reminder be necessary: Jimmy Lai's security law trial has not yet begun but the 73-year-old billionaire is already behind bars after being given prison sentences for organizing and participating in two unauthorized assemblies that were part of the pro-democracy/anti-government protests started by Carrie Lam seeking to enact a controversial and highly unpopular extradition bill back in early 2019.
What passes for "usual" and "normal" in Hong Kong is getting more and more troubling by the month, week and day. (Yesterday also saw a pro-Beijing man sentenced to six years and four months in prison, after he admitted to stabbing and slashing a teenager in the stomach at the Tai Po 'Lennon tunnel' two years ago.  As history professor Jeppe Mulich pointed out, "The absurdity is not that the defendant received a ~6 year sentence, but that sentences in the 4-6 year range are routinely handed out to people for "rioting" offenses. None of which involve the type of violence on display here": specifically, the guilty party in question caused his victim's guts to literally spill out!)
And there's no doubt about Jimmy Lai and Apple Daily being among the Hong Kongers and Hong Kong organizations that are very much in Beijing's sights.  Rather than sow further fear into people here though, Hong Kongers being Hong Kongers, this looked to only encourage more open shows of support for Jimmy Lai and Apple Daily today by way of people going off to buy copies of the newspaper today -- in a repeat of what happened last August after Jimmy Lai was first arrested.
At the first two places I looked for a copy of Apple Daily today, there were no copies of the pro-democracy newspaper in sight even while there were plenty of copies of other newspapers available.  Presumably, this is because the outlets had sold out of copies of Apple Daily rather than because they weren't stocking it or anything like that.  And at the street stand where I finally got a copy of the newspaper, I saw more copies being delivered while I was there -- so I'm presuming that extra copies were being printed late into the day which, of course, would be a good sign indeed for the publication.
Almost needless to say, Apple Daily really could do with some support right now.  As was the case the first time I bought it, it was shocking to see how bereft of ads today's issue of the newspaper was -- and interesting to see that a rare ad in it had been placed by the Hong Kong Polytechnic University (which was itself in the news today for having had researchers involved in the successful landing of China's space probe on Mars).  Hopefully, there will be a new round of ads being placed in the pro-democracy publication in the coming days and weeks.
Even before the freezing of Jimmy Lai's assets, yesterday had been a sad day for Apple Daily -- with the announcement being made that its sister publication in Taiwan would cease publication of its print edition next week.  On a more positive note: today saw it being bestowed with the Kam Yiu-yu Press Freedom Award -- something announced in a Tweet by fellow award recipient Bao Choy, another Hong Kong media personality who knows what it's like to be prosecuted and penalized by the authorities, yet is still continuing to fight for justice all the same.
P.S. It's not escaped my attention that today also saw a tower block in Gaza City that housed media organizations having been destroyed by the Israeli air force.  There's no doubt about it: the press is under attack in too many parts of the world.  And while it can feel like those with guns and bombs have the upper hand at present, one also gets the sense that it's because they fear that the pen really can be mightier than the sword.
Posted by YTSL at 11:34 PM

Any way I don't understand why my country gives so much aid to Isreal.
Coffee is on and stay safe

My sense is that certain countries have guilty feelings regarding how they turned away Jewish refugees from Nazi occupied territories and so feel obliged to support the existence of the Israeli state. However, when the Israeli state itself turns so aggressive against other peoples, the aid should be stopped -- not least since it's not defence they're funding any more but offence.