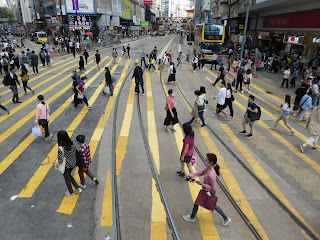 Masking is very much the norm in Hong Kong 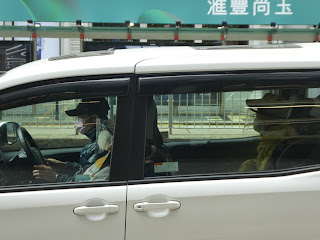 And while there are people who don't want to wear masks (properly),
there also are others who make sure to be super protected!
Let's begin with some good news: Hong Kong has now gone for four days without a new local Wuhan coronavirus case.  With just 22 cases in total in the territory this past week, Hong Kong has had its lowest 7-day total number of new coronavirus cases since June 21st, 2020.
Also, Hong Kong's ultra unpopular Chief Executive issued a rare apology today: to the thousands of people who were recently quarantined because infections involving mutant coronavirus strains were found in their buildings -- not for those draconian actions per se but, rather, because the spartan conditions in which they were quarantined included catered food that was so bad that a number of people, including children, ended up with food poisoning!  In addition, she confirmed today that the plans to require foreign domestic workers to be vaccinated have indeed been dropped -- though, Carrie Lam being Carrie Lam, she couldn't help lacing the sugar with something bitter by announcing that another compulsory test will soon be ordered for this group of close to 400,000 individuals!
Sometimes, it seems, protests -- or, at the very least, outcry and pushback against government plans -- still can bear fruit in Hong Kong.  Now let's see whether the calls to make the 13,000 or so asylum seekers in Hong Kong eligible to be vaccinated against the Wuhan coronavirus and those by University of Hong Kong epidemiologist Benjamin Cowling to (further) incentivise vaccine uptake (with such as as journalist Keith Richburg's suggestion that fully vaccinated people be exempt from quarantine being one I would be on board with) will bear fruit.
Still, it's not like Hong Kong is back to being a place where people feel free to dissent and feel that all their rights which supposedly are guaranteed under the Basic Law really are being genuinely protected.  After all, we have Department of Justice officials -- specifically, the prosecutors in the case against Tong Ying-kit, Hong Kong's first national security suspect -- defending their decision to deny him a trial by jury by arguing that this is not a constitutional right in the territory even while Article 86 of the Basic Law states that "The principle of trial by jury previously practised in Hong Kong shall be maintained".
And when the government has you in its sights, expect them to pile on the charges.  Thus is it that it doesn't seem enough for Tong Ying-kit to already be charged with with terrorism and inciting secession for allegedly driving his motorbike into a crowd of police officers while flying a protest flag on July 1st last year but the prosecutors also want to throw in an additional charge of "dangerous driving causing grievous bodily harm" against him -- the one charge which, if the security law had not come into effect last July 1st, they would have been able to charge him with, and probably make it stick far more easily too.
In addition, there's radio DJ Giggs (real name: Edmund Wan Yiu-sin).  Arrested under the security law in February, he's now been hit with a raft of other charges, including money laundering and an added count of plotting with others to commit a seditious act -- bringing the total number of charges he now faces into double digits!
Many of us have long felt that the likes of Jimmy Lai and Joshua Wong are going to get slapped with charge upon charge and stuck behind bars up until the authorities finally allows them to be free.  But even the more pessimistic among us hadn't realized that there would be so many people that the authorities appear to want to rot in jail until kingdom come.
Looking at just those being prosecuted under China's national security law for Hong Kong (which, as a reminder, has actually been in existence for less than a year), more than 90 people already have been arrested under this draconian piece of legislation.  And, as a ChinaFile study on it has found: "Though they have been charged with various breaches of national security ranging from inciting secession to terrorism, their primary crime appears to be peaceful criticism of the government."
Another quote from the piece: "the arrests thus far suggest the [national security law] is being used to punish the exercise of basic political rights by the government’s peaceful critics".  Or, at the very least, threaten people with such punishment.  And, yet, Hong Kongers are still resisting even while faced with such threats.
Take, as an example, the June 4th commemorations which have taken place in Hong Kong for decades now.  The authorities have effectively banned the annual candlelight vigil in Victoria Park from taking place this year but its organizers have not only called for city-wide commemorative events to take place on the night but one of them, barrister Chow Hang-tung, has indicated that she plans to light a candle in Victoria Park this June 4th.  Hong Kong may well emerge from this pandemic a police state -- rather than the "normal" of yore -- but don't say that its not for want of trying to ensure that this would not be so on the part of those of its people who love freedom and want democracy for Hong Kong, and even on the other side of the Hong Kong-Mainland China border.
Posted by YTSL at 11:55 PM