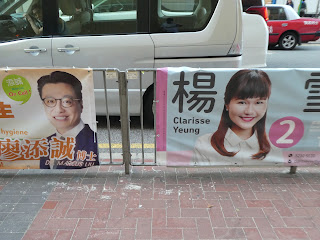 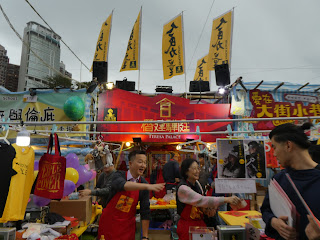 So too is former radio show host turned lawmaker Ray Chan
-- here pictured in happier times manning the People Power
stall at a Chinese New Year market
What I feared would happen today has indeed come to pass.  More specifically, a large number of pro-democracy politicians and activists have been charged under China's national security law for Hong Kong for their organisation and participation in a primary election for the now-postponed Legislative Council election, denied bail and thus jailed.  Sure, it's 47 of them rather than all 55 people arrested last month (but not charged until now) by the authorities.  But it still makes for the largest group of people arrested in one fell swoop for "subversion" under the Chinese security law: not only since the law came into effect in Hong Kong late on June 30th of last year but also since the offence of subversion was introduced into China's criminal law in 1997.
Agence France-Presse (AFP)'s Xinqi Su outlined what this all means on a Twitter thread that includes the following points: "The blow is wide and heavy - [falling] not only those who signed a joint declaration of their intention to use every power a lawmaker has to push for democratisation in HK have been implicated. Among the 6 organisers, only [American citizen but long-time Hong Kong resident] John Clancey is not prosecuted"; "This case will again set [the national security law (NSL)] and Basic Law on a colliding track when the court is asked to decided whether election candidates making up their minds to veto government proposals with powers given by Basic Law is an offence under NSL": and "Last but not least they are not just names, numbers, nor “freedom fighters”" but, instead, human beings.
Also on Twitter can be found a thread about the arrestees -- 39 men and 8 women aged between 23 and 64 years -- that helps to personalize them and gives them a face.  And such is the small world that Hong Kong can be -- and it speaks too to the accessibility of Hong Kong's pro-democratic politicians and activists -- that I personally have interacted with a number of them, including Chu Hoi-dick and "Long Hair" Leung Kwok-hung.  Consequently, today's "development" really does feel like a personal blow.
The sense of devastation is compounded by the fact that, to quote political commentator Antony Dapiran, Hong Kong "has just jailed almost the entire pro-democracy opposition. 47 people - the leading pro-democracy candidates preparing to contest [Legislative Council (LegCo)] elections last year - were today charged with subversion under the national security law, denied bail & jailed pending trial."  And when ones factors in that the veteran likes of Martin Lee, Margaret Ng and Lee Cheuk-yan currently being on trial and facing jail time too, you're talking about generations of pro-democratic opposition members and activists all being put out of action and physically separated from the vast majority of their fellow Hong Kongers.
Returning to today's arrests: As historian Jeppe Mulich has noted, "The charge of conspiracy to commit subversion for organizing or participating in the democratic camp's primary election makes little sense. It's wild conjecture on the government's side, based primarily on an op-ed by Benny Tai. But will that make a difference?"  He follows up with this statement: "On its face the charge is absurd and... seems in contradiction with the [Basic Law (BL)]. But my faith in the [Hong Kong] judicial system is not at its high point right now."  Something which he is most definitely not alone about.
Something else that Professor Mulich Tweeted also resonates with me: "Two million Hongkongers took to the streets on 16 June, 2019 to demand gov't accountability. The pro-democracy camp won 17 out of 18 districts in November 2019 [and it only wasn't a clean sweep because the Islands District has unelected reprentatives]. 600,000 Hongkongers participated in the democratic primary in July 2020. Don't forget those numbers today."  This is not least because it gives a good insight into who are the legitimate representatives of the people and their will here in Hong Kong.
While we're on the subject of numbers, let's consider those that form this date: 2:28.  Someone in the government (be it Hong Kong's or up in Beijing) has a dark sense of humor.  For today is "the 74th anniversary of Taiwan's 228 Massacre, which led to 38 years of martial rule on the island, or so-called the White Terror period."  It also is "the fifth anniversary of the [New Territories East] by-election that saw Alvin Yeung of the Civic Party beat the [pro-Beijng] DAB's Holden Chow, as well as the rise of Hong Kong Indigenous' Edward Leung. Leung is behind bars, Yeung is charged under [the national security law]" today.
Small wonder then that two days ago, "a prominent activist [disclosed that] he’s not afraid of being in prison; he’s afraid that when he comes out there’ll be no one there to greet him cos everyone’s either moved away or been silenced".  And still the world doesn't do much more than wring its collective arms and express its "concern" as what is happening to, and in, Hong Kong. :(
Posted by YTSL at 11:55 PM

I should look up American political prisoners. I might be shocked.
Coffee is on and stay safe

The thing with Hong Kong is that we really didn't have political prisoners here until just a few years ago. So it really still is a shock that we have so many these days -- with an age range going from teenagers to at least one septuagenarian. :(