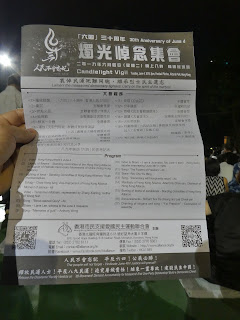 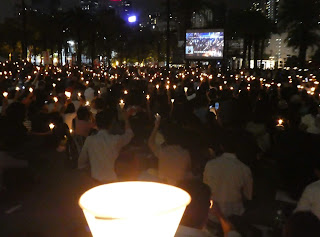 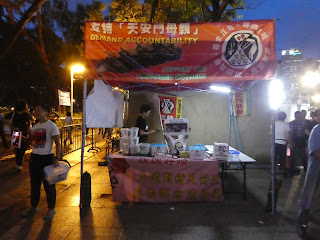 This not least because people in Mainland China, including
those who lost their children on that day, are not allowed to


Thirty years ago today, the lives of thousands of young, idealist Chinese were cut short by members of their country's military -- the so ironically named, in this case, People's Liberation Army -- on the orders of their country's Communist rulers.  Also tragic was the loss to the country of hundreds of intellectuals, student activists and sympathetic government officials through exile in the aftermath of the Tiananmen Square Massacre of June 4th, 1989, and the turning of many a dream of democracy, justice, freedom of speech and such into nightmares.


In addition, in Hong Kong, there was the horrified realization that come July 1st, 1997, the territory and its people would come under the rule of a repressive regime that felt it was justified to get its military force to have its tanks run over unarmed civilians as well as get its soldiers to shoot to kill its own citizens.  But rather than be cowed by Beijing, many Hong Kongers have responded by, among other things, making a point to remember -- and publicly commemorate -- what the Mainland Chinese authorities have tried very hard to get people to forget as well as stop caring about and holding a candlelight vigil in Victoria Park every June 4th since.


What with this year's being the 30th anniversary of the Tiananmen Square Massacre, hopes were high that attendance at this year's candlelight vigil would be on the high side.  In the weeks leading up to this evening though, I had my doubts after discovering that -- in part because this Friday is a public holiday (ironically, the Tuen Ng Festival actually commemorates a Chinese patriot who commited suicide after his kingdom was attacked, and many of its people massacred) -- quite a few people I knew would be taking vacations away from Hong Kong this week.  In addition, I suspect that the Hong Kong Observatory's forecast of rain for this evening caused some fair weather folks to decide against going to Victoria Park at the last minute.


When I met up with the same friends I attended last year's June 4th commemorations with in Causeway Bay this evening though, no drops of rain were falling; and while some sections of ground were wet when got onto Victoria Park's football pitches, they were dry long before the ceremony's end tonight.  Indeed, the most moisture I felt on my person this evening came when, viewing a video of a representative of the Tiananmen Mothers, tears welled up: particularly when she mentioned that, in the 30 years since 1989, more than 50 of their members had passed away and she thanked the people of Hong Kong for continuing to commemorate the events of June 4th, 1989, and mourn the untimely deaths of their children.

Midway through the event, I told my friends that I was disappointed that the football pitches didn't seem as packed this evening as I had hoped and worried that many Hong Kongers have stopped caring about what happened in Mainland China all those years ago.  (I frankly think this would be far more likely than that their having turned pro-Beijing.)  In addition, I know of one localist friend who had opted to attend an alternative candlelight vigil over in Tsim Sha Tsui this same evening.

After leaving Victoria Park and returning home, however, I've learnt of latecomers (some of whom maybe decided to attend after this evening's thunderstorm warning was cancelled at 7pm) having had difficulty getting into the park because of the large crowds in the surrounding streets and heard of people being diverted to the grass lawn.  I also saw with my own eyes people milling about on the sidewalk next to the football pitches (some with lit candles in hand) as well as still other people (also with candles in hand) sitting on the basketball courts next to the football pitches -- and realized that attendance this evening was actually pretty good (and according to the organizers, at a record high)!
Posted by YTSL at 11:59 PM