The end of Hong Kong as we know it? 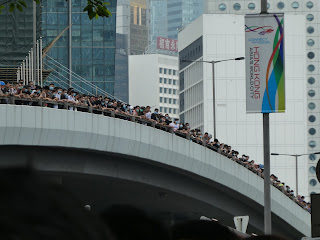 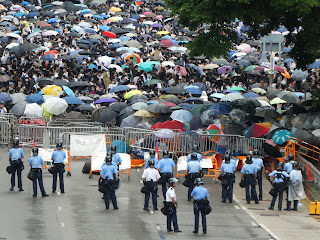 Not for long when there are clashes between the people
and the police (and the government)... 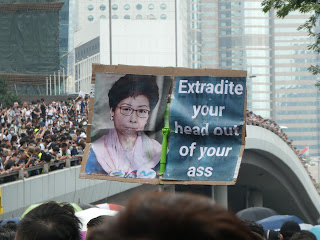 
Last night, I wrote down my hope that the Hong Kong police -- along with the protesters expected to converge at Admiralty today -- would keep calm and ensure that peace would prevail in Hong Kong.  And for a brief period of time today, that was indeed the case.  As luck would have it, those moments in time occurred when I went over to that part of the city where the Hong Kong government headquarters are located -- and I got to see scenes reminiscent of the more upbeat and hopeful moments of the Occupy phase of the Umbrella Movement.


After spending a few hours in the areas where thousands of protesters -- many of them young teenagers -- had gathered (and figuring that the protesters would be camped there for a while), I decided to go home for a break and a meal.  As it turned out, my growling stomach actually made it so that I was not around when the Hong Kong police decided to, first send smoke bombs and tear gas into the crowd, then fire rubber bullets and bean bag rounds at protesters.


Thus it was that, from the safety of my home, I followed what unfolded (and continues to unfold) by way of news media live updates, tweets and live video feeds.  Over the course of the afternoon and this evening, I've read about and seen with my own eyes some pretty horrific actions, including of a policeman nonchalantly attempting to fire directly at a female protester standing just a few feet away from him and his gun, an unfortunate protester bleeding from his nose and mouth (and looking like he was very near death), and a bunch of policeman dragging a protester onto the ground and beating him up in a way that was merciless as well as brutal.  And lest it not be realized, all of those protesters were not wielding any weapons.  (That's par for the course in Hong Kong.)


Before the events of today, I had worried that the passing of the proposed extradition bill that's openly opposed by a very good amount of people in Hong Kong would lead to the end of Hong Kong as "Asia's World City".  Now, I wouldn't be surprised if what has happened in front of cameras and witnesses galore today (and consequently made known by various sources including the one that goes by the moniker of -- ironically named, in this case -- Hong Kong World City on Twitter) makes it so that the end of Hong Kong as we know (knew) it has already begun, thanks in large part to the efforts of Carrie Lam and the territory's thuggish police force.

I, of course, hope against hope that this is not the case; this not least because so many Hong Kongers deserve so much better.  But when the Hong Kong government -- which, more than incidentally, is not a truly democratic one -- does not listen to, do good by or appear to actually care for its people... well, now surely people can understand why they've wanted to have genuine universal suffrage for a good number of years. :(
Posted by YTSL at 11:21 PM