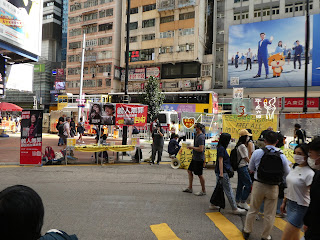 The cry to free political prisoners goes on in Hong Kong 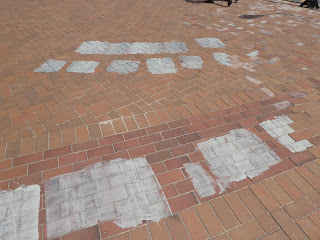 But with each passing day, it feels like more and more
voices of Hong Kongers are being silenced :(
Will this ever end?  For much of Asia, the main concern currently is the Wuhan coronavirus -- specifically, the recent surge in case numbers, even in countries that had achieved "zero covid" for some time like Taiwan and Singapore.  For Hong Kong, which saw one new case today (and it was imported), that which threatens people's peace of mind and overall well being remains political repression.
One day after the annual June 4th vigil organizers called on the police to respect people’s right to assembly (which, lest we forget, is guaranteed under Hong Kong's Basic Law), 10 pro-democracy figures pleaded guilty to organizing an unauthorised mass protest on China’s National Day in 2019.  Sentencing of Jimmy Lai, "Long Hair" Leung Kwok-hung, Lee Cheuk-yan, Cyd Ho, Albert Ho, Yeung Sam, Figo Chan, Avery Ng, Richard Choi and Sin Chung-kai is scheduled for May 28th.  (And, yes, it can seem like a case of "deja vu all over again" in that a number of the individuals concerned already have been found guilty of other "unauthorized" assemblies -- and by the same judge, Amanda Woodcock.)
Basically, the government's strategy appears to be to slap certain individuals over and over again with the same charges and still more jail time.  And should it not be realized: while being guilty of taking part or even organizing an "unauthorized assembly" would have just resulted in fines or suspended sentences before 2019, it now tends to involve sentences of months (even years) behind bars.
Still, lest it be assumed that the authorities are out to prosecute and penalize a small number of people, consider that 10,250 people have been arrested since June 2019 in protest-related cases, 2,500 of whom had been prosecuted, and 107 arrests have been made under the less-than-one-year-old national security law to date, of which 57 have led to prosecution already.  Indeed, today also saw the sentencing of a taxi driver to four years imprisonment for transporting more than 40 petrol bombs during pro-democracy protests in October 2019; this despite his pleading not guilty to charges of conspiracy to commit arson and possession with intent to destroy or damage property, saying he was told – and he believed – the box he was transporting in his taxi contained medical supplies.
In further disturbing news, Next Digital (the parent company of Apple Daily) suspended trading of its shares this morning, pending the release of a statement regarding the Hong Kong Security Bureau’s move to freeze assets and shareholdings in the company held by controlling shareholder Jimmy Lai.  Even before this, Taiwan’s Mainland Affairs Council had issued a statement warning that risks for businesses have increased in Hong Kong in the wake of the freezing of Jimmy Lai's assets by way of China's national security law for Hong Kong; something that the not inconsiderably percentage of international business folks who already are worried about the national security law will undoubtedly take note of.
Speaking of the national security law: Labour Secretary Law Chi-kwong has warned that the authorities may cancel the registration of trade unions as part of the government's new duties under the national security law.  This prompted Hong Kong Watch's Benedict Rogers to Tweet: "Good grief.  First they came for the protesters.  Then the legislators. Then the academics and teachers. Then the journalists. Now the trade unionists."
Such is the reach of the security law that it now is the case where a journalist seeking to get people to speak on camera about vaccine hesistancy in Hong Kong is told that he stands little chance of doing so because of security law fears.  Speaking of which (vaccine hesitancy, I mean): it's actually quite the surprise to realize that, even Hong Kong's coronavirus vaccine take up has been way too low and slow for many people's liking, it's actually been higher (in terms of percentage of the population) and faster than that of a number of other Asian territories, including Taiwan, Japan and South Korea!
Posted by YTSL at 11:57 PM