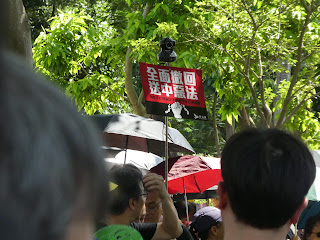 Protestors and cameras abounded in Hong Kong on July 1st, 2019 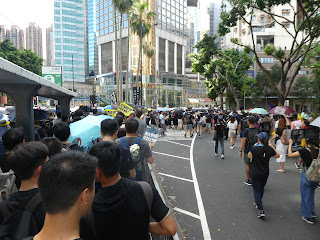 Marching from Victoria Park to Admiralty and beyond
on that fateful day
Taking Back the Legislature (Hong Kong, 2020)
- Hong Kong Documentary Filmmakers
Back on July 1st, 2019, a bunch of (radical) protestors decided to break into the Legislative Council building at Admiralty and "take back the legislature".  The decision and agreement came at around 1.15pm, some two hours after they had assembled Admiralty.  At around 8.50pm, close to seven and hour hours after that decision was reached, entrance into the Legislative Council (LegCo) finally occured.  In between, a protest march, involving hundreds of thousands of (other) protestors against the proposed extradition bill that had got so many Hong Kongers out on the streets, took place.
But Taking Back the Legislature pays scant attention to that -- which had felt like the main event for those who had taken part in it (like yours truly).  Instead, this 44-minute-long documentary -- by the same group of filmmakers who also went on to make/be credited with Inside the Red Brick Wall, the feature length work documenting the November 2019 PolyU siege -- focuses on what happened outside and inside the Legislative Council complex at Admiralty that afternoon, even while also providing documentation of what transpired earlier that day at Wan Chai (e.g., the flag raising ceremony, which was held indoors for the first time ever).
Like with Inside the Red Brick Wall, the faces of many of the extradition bill protestors are blurred in this work, presumably to help protect them from prosecution.  As Claudia Mo -- then a legislative councillor but now, ironically, currently behind bars herself -- pointed out early on in the siege of LegCo, those who were attempting to break into the building were risking getting jailed for up to ten years for the offence.
On the other hand, all the pro-democracy legislative councillors who were also against the extradition bill but, at the same time, were trying to prevent other protestors from breaking into LegCo that day, are easily identifiable to those familiar with Hong Kong politics and politicians.  I reckon it would have benefited the audience of Taking Back the Legislature for the likes of Lam Cheuk-ting, Eddie Chu Hoi-dick and Roy Kwong to have been explicitly and individually identified though; otherwise those who are less familiar with those personalities and about the events concerned will not be able to truly appreciate what was going on that day, and documented in this offering.
Here's the thing: The storming -- and "taking back" -- of LegCo is/was something which did not have universal backing -- even among those who were against the extradition bill.  This is something Taking Back the Legislature actually does make clear early on; with its documentation of individual protestors imploring those who were thinking of doing so to think twice and carefully about their plans to do so.  Also, to a man (and woman), the members of the pan-democrat camp of legislative councillors who appear in this documentary are shown opposing the decision of the yellow helmetted individuals who decide to do such as ram a shopping cart against the glass door of the Legislative Council's public entrance (locked that day on account of it being a public holiday but usually left unlocked when the Legislative Council is in session, ironically enough).
At the same time, what should not be in doubt is that all of these people were trying to stand up for and save Hong Kong in their own way.  And even while the general sense one gets is that those who chose to "take back" the legislature were among the considerably more hot-headed of the extradition bill protestors, Taking Back the Legislature also shows that at least some of these individuals actually were political knowledgeable and had logical reasons for deciding to try an alternative mode of protest from what the legislative councillors and wo lei fei (peaceful, rational and non-violent) protestors were carrying out.  (A heated exchange outside LegCo about Leung Yiu-chung's previous actions really cut to the bone and provides context for the white-haired veteran legislator being literally pushed out of the way by more radical protestors at one point.)
Perhaps it's my personal bias showing but, for me, nonetheless, the true heroes of Taking Back the Legislature aren't those who broke into LegCo but, rather, those who tried to make sure that those who did so, and their supporters who massed outside the building, were not harmed -- by the riot police who inexplicably allowed the protestors to do so and spend more close to three hours in the complex before returning to clear the area.  The courageous efforts of the now exiled Ted Hui and social worker Jackie Chen, in particular -- both of whom put themselves in between the protestors and riot police, and consequently, potentially, in harm's way -- are worth recognizing.
Strange but true: the latter also (inadvertently) provided some comic relief by way of by her calmly tendering advice to the riot police as to how they should comport themselves amidst the chaos and insanity of it all.  All in all, I find myself wishing that there were more people around who were/are as level-headed as her.  And I can't help thinking that if that had been the case back on July 1st, 2019, Hong Kong might be in a different situation now than it currently is.
My rating for this film: 7.5
Posted by YTSL at 10:06 PM