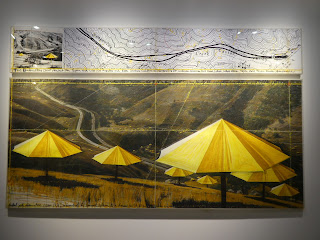 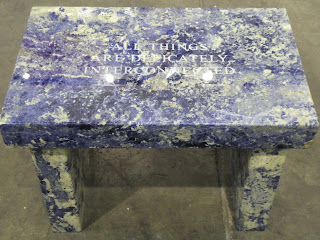 Jenny Holzer's Selection from Truisms:  All Things Are...,
also seen at Art Basel -- Hong Kong 2017
Art Basel returns to Hong Kong after a pandemic hiatus but I'm not in the mood to check out the scaled-down art extravaganza.  For one thing, the Wuhan coronavirus pandemic is still not over by a long chalk; with multiple death and infection hotspots found throughout the world.  And even while Hong Kong is mercifully not one of them, with the territory not having recorded a new local case for five consecutive days now, there really is no guarantee that Hong Kong won't be hit by another outbreak and wave in the future; this especially since we are no way close to "herd immunity" here, thanks in no small part to Hong Kong's high covid vaccine reluctance.
For another, political persecution really can be such a downer.  And I'm not just referring to the fear of artistic censorship and self-censorship; however real and scary it is.  To wit: Reports have emerged of West Kowloon Cultural District Chief Projects Officer Jeremy Stowe having been "visited" by law enforcement officers and placed on "private leave" yesterday.  Rather, the fact of the matter is that pretty much all of Hong Kong is under threat these days.

I honestly don't know why the ruling yesterday by High Court judge Alex Lee that the first person to be charged under Hong Kong’s national security law will not be allowed a trial by jury has not received greater attention, both locally and internationally.  Personally, I find it chilling news -- not least because we have confirmation yet again that the Basic Law (Hong Kong's so-called "mini-constitution" has been superseded by China's security law for the territory) -- that the judge -- who, more than incidentally, is one of those designated by Carrie Lam to handle national security law cases – said that, unlike in the United Kingdom, an accused person in Hong Kong does not have a general right to a jury trial (any more).
As various people have pointed out, prior to the coming into effect of China's security law for Hong Kong, all cases heard at the High Court (AKA The Court of First Instance) took take place with a jury composed of between seven to nine people.  But the case of Tong Ying-kit, the 24 year old accused of inciting secession and terrorist activities after he allegedly rammed a motorcycle displaying a protest flag reading “Liberate Hong Kong, revolution of our times” into three police officers in Wan Chai last July 1st, the dayafter the security law came into force, will not.
In light of this turn of events, barrister Senia Ng has been moved to ask: "What protection does this leave people with?" This since it's now been ruled that the National Security Law (NSL) overrides existing laws in Hong Kong and cannot be challenged as being unconstitutional.  Meanwhile, journalist Ryan Ho Kilpatrick has pointed out that even the Chinese baker accused of seeking to murder Hong Kong's European population with arsenic-laced bread back in 1857 had a trial by jury -- which is probably why he was acquitted of that very serious charge!
Another piece of news yesterday that dampened my mood involved Eddie Chu Hoi-dick -- who is among the 47 activists chargedunder the national security law having organized or participated in thedemocratic primaries for the LegCo elections scheduled for last year that were eventually postponed (if not outright scrapped), and currently behind bars after being denied bail -- announcing that he will be leaving politics since "he believes he won't be freed for a long time, as he’s also facing five other criminal charges."

Back in September 2016, the then social activist was dubbed the King of Votes after getting the highest number of votes atthe last Legislative Council elections that Hong Kong may possibly see, with the 84,121 votes he garnered for his geographical constituency seat putting Carrie Lam's 777 votes received to be selected Chief Executive of Hong Kong to shame.  I remember being very happy about the victory of the man who has long worked to better Hong Kong; this not least because I had met his acquintance and thus personally witnessed his advocacy and sincerity back in 2009, when I went on a tour of Tsoi Yuen with him as the guide.

Chu also has announced that he will be disbanding the political group he formed after the 2016 LegCo election. Nevertheless, he says, he "will never forget the beautiful times he spent working together with his comrades. He wishes everybody peace".  And while that sounds fine and well, the thing is that his voiced sentiment got me thinking of Liu Xiaobo's "I have no enemies" declaration after being awarded the Nobel Peace Prize.  And, sadly, we know what happened to the Chinese dissident.

Truly, I don't want Hong Kong's political prisoners to suffer Liu's fate.  Or, for that matter, that of others of Beijing's enemies who were sent to prison (and their deaths there).  Actually, I don't even want people to forget them.  Which is one reason why I write on this blog about the likes of Eddie Chu Hoi-dick, Figo Chan, Wu Chi-wai, Jimmy Lai, Joshua Wong, etc., etc.  They may not have been the extradition bill's protest leaders but they also are people who have sought to help make Hong Kong for years now.  Hence their being deserving of our support, now as well as back then.