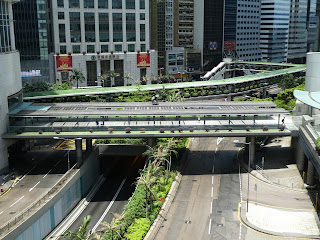 One Saturday morning in Central... 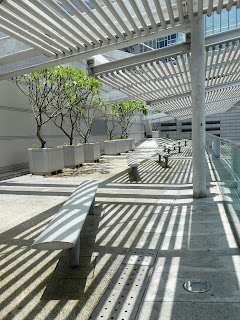 A quiet corner of the International Finance Centre (IFC) 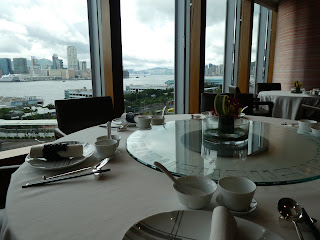 Waiting for others to arrive for lunch at Lung King Heen ;)
A few years ago, I viewed Fruit Chan's The Midnight After at the Hong Kong International Film Festival.  Among the most fascinating scenes in this horror-comedy about 17 people who mysteriously become the only folks left in Hong Kong are those which show whole swathes of the territory transformed into a veritable ghost town bereft of human life.
Not only did was this visually impressive but many of the movie's audience got to wondering how the filmmakers managed to shoot those scenes since the urban sections of Hong Kong are notoriously filled with people.  But as I found one Saturday last month, there are times when the supposed heart of the city that is its Central District can be much more empty than most of us actually realize or even might be able to imagine!
It was late morning when I headed over to that part of the Big Lychee to enjoy one more delicious dim sum lunch at three-Michelin-star Lung King Heen with some friends.  After first stopping by at City Hall to get a couple of tickets to an upcoming classical music concert, I realized that I had over-estimated the amount of time that I'd need to get this done.  So I decided to kill some time by hanging out for a bit at the rooftop garden atop the IFC Mall which few people don't realize is open to the public.
Upon getting up there, I found that I had quite the choice of empty seats if I were so inclined.  But I elected to walk around and admire the landscaped space, and also the views to be had from that upper floor.  Understandably, those overlooking Victoria Harbour garnered more attention but I found myself getting fascinated with the less scenic views of the nearby thoroughfares: which first attracted my attention because of their multi-level nature but then really intrigued by how under-trafficked they were at that time of the day and week.
For those who're wondering: my lunch appointment that day was at 12.30pm.  And seeing that Lung King Heen is in the Four Seasons Hotel, which is located within the IFC complex, I knew that I could head over there from the rooftop garden within just 10 minutes or so.  Which is what I proceeded to do.
Rather amusingly, the "empty" theme continued upon my getting into Lung King Heen as I turned out to be the first of my party to get to the restaurant and I also found the nearby tables unoccupied.  More than incidentally, one of the things I do appreciate about this particular dining establishment is that there's quite a bit of space between each table -- something which is quite the luxury in Hong Kong!  And, as can be seen in the photo I took there, the views from its window seats are quite something too! :)
Posted by YTSL at 11:21 PM

Jealous! What dim sums did you order at Lung King Heen? Or perhaps you prefer entrees like fried shrimp and pear balls? Forgot what it's called.