Malaysian and Japanese shaved ice desserts that are perfect to have on steaming hot days! 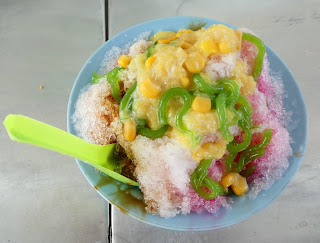 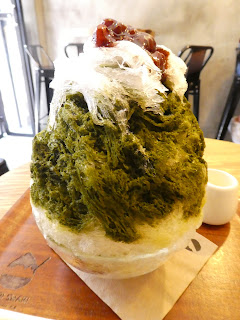 Japanese kakigori
What's a dessert whose ingredients include shaved ice, flavored syrup and beans?  If your answer is Malaysian ice kacang (whose name translates into English as "bean ice"), you would be right.  But yours would be a correct answer too if you had said Japanese matcha flavored kakikori since that particular seems to invariably be topped with adzuki beans!
In addition, you'd be absolutely spot on if you were to conclude that both of them are ideal dishes to have on steaming hot days like those which Japanese and Hong Kong summers are full of, and which occur pretty much all year round in Malaysia!  Which is why I often myself craving to have those desserts when the temperature gets on the high side.

So it should be no surprise that pretty much whenever I am back for in Penang for any length, I'll have ais kacang at least once while there.  But whereas I usually patronize the long-established stall in Swatow Lane currently operated by the great grandchildren of a man who served up ais kacang to my mother when she was a schoolgirl, my mother introduced me to the delights of a much newer ais kacang stall on my most recent Penang visit that served up its own variant of the dessert that was arguably as delicious as those from the stall that I have sampled over the years (and decades!).

While most ais kacang vendors bathe the shaved ice in rose syrup as a matter of course, the folks at Swatow Lane also offer a sarsaparilla syrup option that I like quite a bit and often go for.  And at this "new" stall located in the car park where the old Balik Pulau wet market used to be that my mother introduced me to, I was introduced to another topping that I reckon worked really well: liquid gula melaka -- which the Myanmar-born ais kacang seller poured onto half of the shaved ice while flavoring the other half of the dish with the classic rose syrup.
Considering that "Blue Hawaii" is an actual, popular kakigori flavor, perhaps one day makers of the Japanese dessert will also think to offer gula melaka or rose syrup toppings (though given the Japanese aversion to the similarly-tasting root beer, I can't see sarsaparilla flavored kakigori ever becoming a thing).  For now though, the closest thing to ais kacang that I can get in the Land of the Rising Sun -- and also Hong Kong, with its wide range of Japanese food offerings! -- is matcha flavored kakigori since it also often comes topped with red beans and even tends to be accompanied by a condensed milk, like with Malaysia's ais kacang! ;b
Posted by YTSL at 10:35 PM

While rose syrup and red beans seem to be the typical ingredients, is ice kacang supposed to be more of a solid shaved ice? Or a slushy drink? I usually see the latter but I suspect that Malaysian restaurants in Canada may have been "fusionizing" their products to suit the local clientele. What do you look for in an authentic ice kacang?

The ice of ice kacang is more solid shaved ice (along the lines of what you'd get with kakigori) than slushy. Put it another way: it's more a dessert one eats than drinks. As for other ingredients I'd expect to find in an authentic ice kacang: definitely creamed sweet corn and some kind of jelly like substance (be it cubes of black grass jelly or strands of green rice flour jelly). And while it's not always included in ais kacang, I consider it a major plus when there also is nipa palm fruit (known in Hokkien as atap chee) in the mix. :)

Creamed corn, yes. Green jelly, yes. But kakigori-like shaved ice and the fruit of a palm I've never heard of? Now I'm sure I've never had a proper ice kacang!

Something else about the shaved ice: I've only ever had it shaved using a manually-operated machine. Consequently, the ice is actually not as feathery as that which have been part of kakigori and, also, Taiwanese shaved ice desserts that I've sampled. (Note: hope that doesn't sound like a complaint as it isn't meant to be!)