Nature's revenge with no small amount of help from the typhoon(s)? 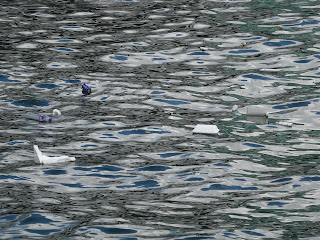 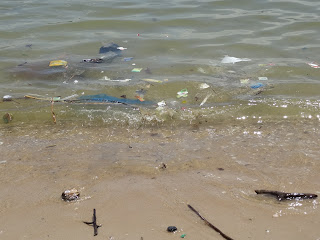 A lot of it floats ashore at some point or other 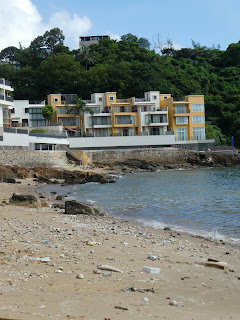 And consider how more awful things got
because of that palm oil spill earlier this month :(
As Hong Kong braced for visits by typhoons last week, some environmentalists were also bracing for more palm oil spilt as a result of a ship collision that we've latterly learnt actually occured just four kilometers from Hong Kong (as opposed to further away in the Pearl River Estuary) to wash ashore.
In the wake of Typhoon Hato hitting Hong Kong, reports came in of large globs of grease along with other ocean debris being washed ashore onto beaches and other areas close to the water.  In addition, a friend told me of his having spotted palm oil "balls" for the first time at Big Wave Bay on Hong Kong Island on his first hike after Typhoon Hato hit the Big Lychee and I know that beach clean-ups are continuing to take place at Lamma Island, more than one of whose beaches has been covered by spilled palm oil.
Those who want to have a look for themselves can check out images posted on Twitter of the likes of Big Wave Bay, and the Mui Wo waterfront over in Lantau being covered by all manner of rubbish washed ashore by the extra big waves generated by Typhoon Hato.  I found a caption for one of them most apt: "It's like the sea has regurgitated all of the junk we've been feeding it".
And I really do hope that the sight of all this actually does have get more people to open their eyes to how polluted our waters are -- and, also, how much of the trash is of the everyday variety, generated by individuals rather than "just" large corporations and such, and sometimes so very casually.

Some years back, while exploring the southern tip of Chung Hom Kok, I got caught in the rain and found shelter in what I later found out was a former coastal gun battery.  Among the people who joined me there were a trio of anglers who pulled out some cans of beers to drink while they waited for the storm to pass.  After it did so, they gleefully made for their former positions but only after chucking their now empty beer cans into the water and leaving me frankly flabbergasted.
You'd think that people who are fishing enthusiasts would want the waters to not be polluted.  But there they were, happily adding to the rubbish floating about in the sea!  I could only conclude that they were among the too many people who think that the oceans are so vast that they can swallow up all the pollution that humankind can throw at it.
Except I don't think it can.  At least not forever.  And so there is a part of me that wishes that the sea would indeed regurgitate the junk we've been feeding it more often so that (more) people would get to realizing this. :S
Posted by YTSL at 11:56 PM