Our Sanrio Times, featuring Winkipinki as well as Hello Kitty and other favorite characters!

Within a large room full of Sanrio plushies... 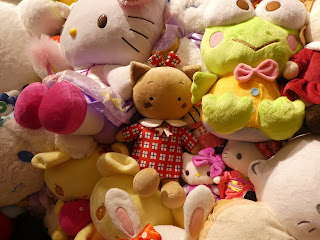 ...the sight of one particular kitty plushie got me squeaking with joy! :b
For the second day in a row, I went on ferry rides that took me further than just across Victoria Harbour.  While I went over to Lamma Island to take part in an emergency beach clean-up yesterday, today's trip to Macau was far more pleasurable in nature.  More specifically, I went with a friend who's a fellow fan of Hello Kitty to check out Our Sanrio Times, an exhibition cum nostalgic stroll down Memory Lane that's running from July 28 to September 3 at the Studio City Macau resort!

Before we walked into the exhibition area,  I told my friend that I'd consider my admission ticket and trip all the way to Macau to be worth it if we found enough at Our Sanrio Times to interest and occupy us for even one hour.  As it turned out, we ended up spending more than two hours in what's a pretty mega fun as well as mega-sized exhibition which features, among other things, 15 Sanrio-themed installations and a 3.5-meter-tall Hello Kitty!

Best of all, for me, was my sightings of my Sanrio first love, a brown cat with cute eyebrows and a tendency to blush named Winkipinki in various rooms within the exhibition, including one with hundreds, if not thousands, of plushies adorning its walls!  Part of me is embarassed to admit it but another part is unabashed about the fact that every time I caught sight of my absolute favorite cute cat character, I couldn't help out but squeal as well as smile with utter joy; this not least because every sighting of her was so unexpected!

You see, some time ago, Sanrio appeared to have discontinued production of items bearing Winkipinki's visage but my Winkipinki adoration has never died.  So even while I nursed a hope that she'd be included in Our Sanrio Times, since the exhibition promised to shine a light of many other Sanrio creations besides the iconic Kitty Chan, that hope was actually so faint that I hadn't dared to voice it out aloud to anyone!

Perhaps it's my Winkipinki obsession influencing my judgement but, as it turned out, it felt like there actually was more attention given to the brown feline in this exhibition than, say, Badtz Maru or even Gudetama (though not Hello Kitty herself and Pompompurin (aka "Pudding Puppy", as a fan of his I know took to calling him)).  Does this mean that Winkipinki is coming back into favor at the head office?  I, for one, would be a super happy camper if that were the case! :)
Posted by YTSL at 11:59 PM

Glad to hear you enjoyed yourself!!!

Indeed! Otherwise, I'd have blamed you for letting me know about Our Sanrio Times' existence... ;)