Dark days in the SAR 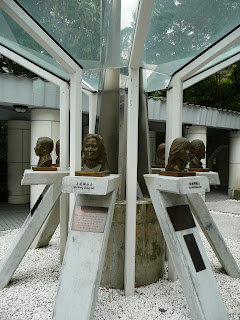 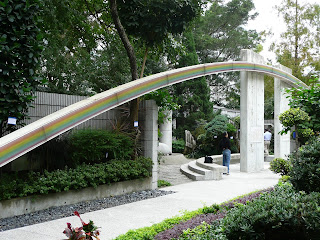 The rainbow sculpture nearby looked to serve as a reminder
that even at the darkest times, one should continue to hope,
even expect, that there will be bright and beautiful days ahead


Less than a year ago, Nathan Law became Hong Kong's youngest ever individual elected to the Special Administrative Region (SAR)'s Legislative Council.  At the time, he was only 23 years old.  On this young man's 24th birthday, tragedy struck in the form of Nobel Peace Prize winner Liu Xiaobo passing away while still in the custody of the Mainland Chinese authorities.  The day after was plenty bleak too: with a legal ruling in a Hong Kong court paving the way for Law and three other pro-democracy legislative councillors being stripped of their political titles and office.


And now any plans for him to contest the by-elections that are needed to fill the seats of those -- and two pro-independence -- popular representatives have to be cancelled in the wake of another Hong Kong court ruling: with this latest one sentencing the young man to eight months imprisonment, 26-year-old Alex Law to seven months in prison, and the youngest at just 20 years of age, Joshua Wong, to six months in jail; and adding insult to injury by including the stipulation that all of these convicted Umbrella Movement leaders are ineligible to run for a seat in the Legislative Council for the next five years.


Although, few people will have found the conviction of the trio for the non-violent protest-related "crime" of unlawful assembly unexpected (including the trio at the center of the present storm), given the direction the political winds have been blowing and tides have been turning, the judgement rendered is still very upsetting all the same.  In view of all the wounds that have been inflicted on Hong Kong by Beijing of late, the creation of what may well be the world's youngest political prisoners can feel like the straw that broke the camel's back -- in terms of resistance for some, but maybe also tolerance for others.


Put another way: I truly fear that there are people out there who will take this legal judgement as meaning that the time for civil disobedience is over; with some frustrated folks out there being far more seriously inclined now to resort to the sort of acts of violence and terrorism that thus far have not occured outside of the cinematic imagination in Hong Kong.  That's how dark a mood the news of the chillingly harsh punishment meted on the young pro-democracy campaigners put me in.


Seeking some respite last night by going to a favorite bar (where good company is regularly to be found along with fine drinks and tasty food), I initially did my damndest to avoid any serious discussions there.  As the evening wore on, however, I found myself listening to a 30-something-year-old Hong Konger friend recount what he considers to be the darkest days he's experienced -- days when he felt like Hong Kong truly was doomed.


Rather than fixate on a particular political event, he focused attention on that time in 2003 when Hong Kong fell victim to the SARS outbreak.  Over the course of a few months, the disease more formally known as the Severe Acute Respitory Syndrome infected 1,755 people in the territory (out of 8,098 worldwide) and killed 299 people in Hong Kong (out of 774 deaths worldwide).  The SARs epidemic also negatively affected the psyche of millions of people, causing them to live in fear and dread for what must have seemed like a hellish eternity.

Here's the thing though: Hong Kong survived this disaster (which, more than by the way, came out Mainland China).  Not only has it endured but it has flourished a good deal more than pretty much anyone could have expected that it would have back in the spring of 2003.  Also, during those dark times, heroes and heroines emerged.  I hope this will happen too while Hong Kong seeks to weather this latest storm; only without any fatalities -- like in the eight medical personnel who gave their lives to help cure others stricken with SARS 14 years ago -- this time around.