No Face, a broom, and misbehaving Studio Ghibli fans?! 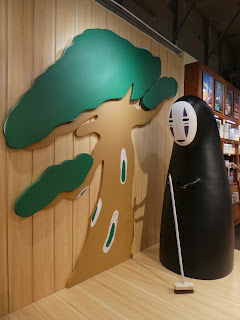 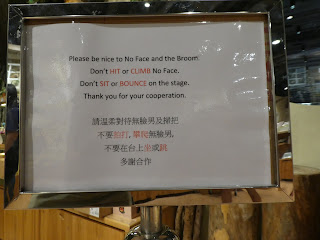 A sign nearby in English and Chinese with instructions about
how to treat (or not, as the case may be) No Face and the broom!
After marching from Wan Chai to Central yesterday afternoon with tens of thousands of others to express our solidarity with the young men recently sent to prison by the authorities for acts of civil disobedience which many people find far more admirable than criminal, a friend and I decided to have an early dinner on the other side of Victoria Harbour at a restaurant located within the cavernous Harbour City complex in Tsim Sha Tsui.
With time to spare after dinner, and our mood considerably brighter and lighter than it had been earlier in the day (thanks in part to having received a boost to our morale post seeing so many Hong Kongers still willing to stand up for others who they believe have been wronged), I decided to drag my friend -- who is not unfamiliar with things Studio Ghibli -- into the Donguri Republic store located within the mega-mall.
The large, familiar figure of of O-Totoro greeted us at the entrance to this very attractive character goods store.  As I told my friend (and also promptly demonstrated to her), I find it well nigh impossible to pass by what is effectively a giant plushie without stroking it a few times; something which -- as far as I know -- is not discouraged by the Donguri Republic personnel!

A new feature at the store (or, at least, one which wasn't in place on my previous visits) is a stage area on which can be found Spirited Away's No Face along with a broom that people can pose with and have their photos taken if they so choose.  During my time at this branch of Donguri Republic, no one seemed all that inclined to do such -- or, for that matter, interact in any other way -- with this Studio Ghibli movie character and its broom prop.  But it seems some kind of mischief must have occured in the area since, in their vicinity can be found a sign in both English and Chinese asking people not to hit or climb No Face, sit or bounce on the stage -- and generally be nice to No Face and the broom!
Upon seeing the sign, my first reaction was to laugh incredulously at the need for such a sign and, also, at the way the requests were worded (especially the first line of "Please be nice to No Face and the Broom").  My second reaction was to try to figure out who would actually misbehave at a Studio Ghibli character goods store!
I suppose the most logical suspects would be young children with parents who haven't taught them how to behave appropriately in public, etc.  But looking around me, it's actually the case that adults predominate at pretty much every Donguri Republic store I've visited, be they in Japan or Hong Kong; and those individuals who are fans of Studio Ghibli don't tend to look like they have anger management issues or hooligan tendencies!  (And for the record, it's been similar with Funassyilands and also outlets showcasing Sanrio products!!) ;b
Posted by YTSL at 11:29 PM