Taking part in a beach clean-up while pleasure seekers seem oblivious to the pollution around them! 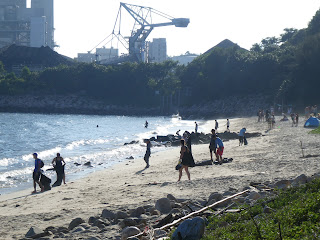 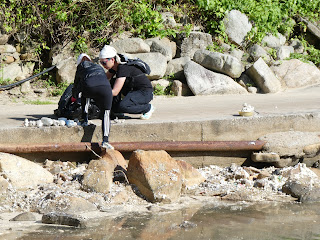 I find it hard to understand how some people can seem
so very oblivious to the presence of gunk like this! 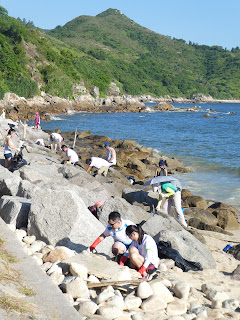 So definitely more on the side of the dedicated
volunteers rather than the heedless hedonists!
Two days ago, the Hong Kong government re-opened five of the thirteen beaches it had closed to the public earlier in the week.  And what with this weekend seeing what some people look upon as perfect beach weather, it probably shouldn't have come as too much of a surprise to see the likes of Hung Shing Yeh and Tai Wan To beaches filled with sun-worshippers, families with kids eager to play in the sand and frolick in the water, and other folks out to have a good time on a hot afternoon with beautiful bright blue skies.
But, if truth be told, I was rather shocked to see so many people determined to have fun out there when I visited Lamma Island for the second time this week; this since my reason for going to Hong Kong's third largest island this afternoon around was, as was the case this past Tuesday, to take part in an emergency beach clean-up organized in the wake of thousands of tons of palm oil having been spilled into the sea and so much of it having washed onto Hong Kong's shores.
It's entirely possible that over-optimistic government reports and announcements about the potential dangers of the spilt palm oil and the clean-ups effected (including by hundreds, if not thousands, of volunteers) had given many of those leisure seekers who had ventured onto the beaches a false sense of security.  It's also highly probable that a number of individuals (notably tourists who don't check the news when they're on vacation) had not heard about the environmental disaster.
At the same time though, you've got to think that such folks would feel some concern when they see hundreds of volunteers descending onto the beaches to clean up the gunk and other rubbish visibly lying on the sand, floating about in the water and coating the surface of the rocks nearby.  Sadly, however, like was previously the case when I took part in beach clean-ups over on Cheung Chau, it really can seem like there are a large number of people absolutely determined to have their fun come what may and content to subscribe to the philosophy that ignorance is bliss!
Still, if the numbers of volunteers out there today (as well as on previous days) are any gauge, there's actually plenty of folks out there who care about the environment and willing to devote some time and effort to trying to make a difference.  And even while I definitely do worry about the dangers that the spilled palm oil has had -- and will continue to have for some time -- on the marine life, especially after bacteria collects and grows on it, I also take some comfort in there being considerably less of the palm oil on the beach relative to earlier this week -- so that today's beach clean-up felt like a more "normal" one in terms of my actually picking up lots of "regular" trash (including bits of plastics and styrofoam) rather than "just" the gooey semi-solid palm oil itself.
Posted by YTSL at 10:42 PM

I don't believe we have clean up day for our community.
Coffee is on

If a place is clean enough to not need community clean-ups, that would be a good thing! On the other hand, group clean-ups can engender a lot of good feeling as it shows that there are people out there who really do care about the place they live, the environment, etc.