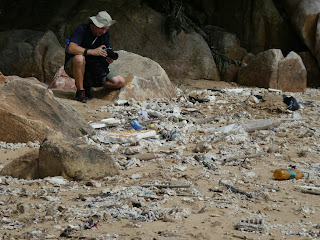 Not a pretty picture but one that needs to be documented 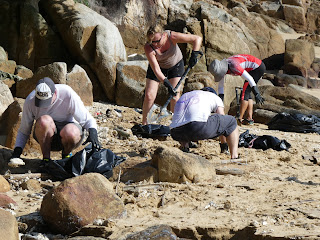 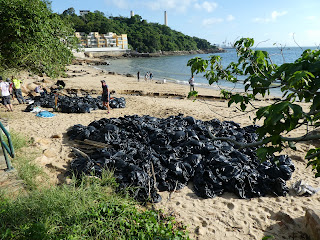 Pretty much whenever I've been over to Lamma Island, it's been to get in some hiking.  Occasionally, I've also gone all the way there to have dinner at the Rainbow Seafood Restaurant.  But while I've not spent all that much time on its beaches, it's not like I haven't been tempted; including on a visit there last summer when the sands of Hung Shing Yeh Beach and the waters off it looked beautifully clean and extremely inviting.

As it so happens, I spent a few hours at a beach in Lamma yesterday afternoon.  But rather than relaxing out on the sands of -- and/or waters off -- Ngau Kau Wan, I took part in an emergency beach cleanup organized in the wake of hundreds, if not thousands, of tons of palm oil having washed ashore onto it and many other Hong Kong beaches; an environmental disaster that came about after a collision in Mainland Chinese waters caused a ship to leak some 9,000 metric tons of the semi-solid liquid and the Mainland Chinese authorities delayed informing their Hong Kong counterparts of what had transpired for a couple of days.

At first glance, the semi-solid oil can resemble snow or my (previous) beach clean-up pet hate, styrofoam.  However, it definitely doesn't feel like either of those materials and, instead, is much closer in touch and general appearance to lard.  Greasy in feel, it easily seeps into the smallest openings and turns everything it coats -- including, sadly, fish which then die and wash ashore -- into a pretty unholy, sticky and slimy mess.  Furthermore, it's really hard to get off your clothing and shoes as well as invariably gets onto them when you're going about trying to do such as clean up a beach.

Truly, trying to get rid of the palm oil that had spilled onto the beach can seem like an impossible task as well as seriously dirty work.  And this all the more so in high heat and humidity, as is the case on a hot summer day in Hong Kong like yesterday very much was.

In all honesty though, if you care about Hong Kong and/or the environment (or even just enjoy eating seafood), you'd feel obliged to pitch in and help clean things up.  And even though the work is demanding and tiring as well as leaves one feeling absolutely filthy for at least a few hours, I'm definitely up to take part in more beach clean-ups in the days to come (even while hoping very much so that the day will come when people truly get that prevention is better than cure, including with regards to the environment).
Posted by YTSL at 11:50 PM