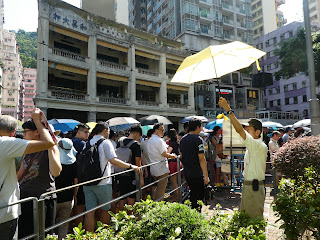 Raise the (yellow) umbrellas!
The Umbrella Movement is alive still! 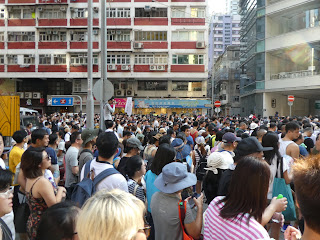 Make no mistake: there were tens of thousands of people
out marching on the streets of Hong Kong this afternoon! 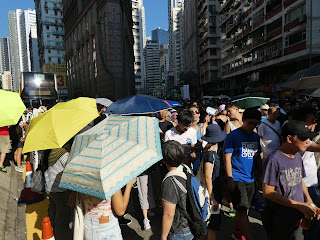 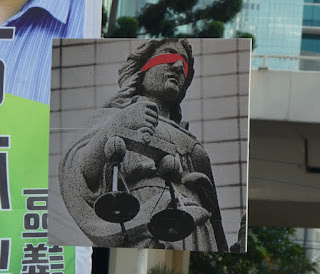 Showing solidarity with Hong Kong's young political prisoners,
people protested Hong Kong's wheels of justice now looking to be
attached to a vehicle being recklessly steered by Beijing
Earlier today, I took part in my fourth protest march of 2017.  This is pretty amazing when you consider that until July 1st, 2012 -- the 15th anniversary of Hong Kong's being handed over by the British to China and, more pertinently, Leung Chun Ying becoming the SAR's third Chief Executive -- I had never taken part in a protest march in Hong Kong.  (And for the record, before I moved to Hong Kong, I only had ever taken part in one solitary protest march, back during my student days in the USA!)
Contrary to what some people might think, I don't actually enjoy going on protest marches.  It's not fun getting rained on (as was the case last month during the candlelight march in memory of Liu Xiaobo), or hanging about in swelteringly hot and humid conditions waiting for the police (who are supposedly there to maintain order but often seem to invite disorder by frustrating folks) to allow you to get moving.
Far more seriously and importantly: I wish it didn't seem as though the best -- and maybe only genuine -- way for Hong Kongers to ensure that the powers-that-be and the world-at-large know their concerns at what ails the territory is through street protests (as opposed to, say, elections in which there is genuine universal suffrage).
I know people who, especially after the Occupy sites were vacated back on December 2014, with genuine universal suffrage not (yet) achieved, have decided that it's useless to take part in public protests of any kind.  However, I remain of the opinion that protest marches in support of causes I believe in, and memorial vigils such as that which takes place annually in Victoria Park, still are very much worth taking part in; this not least since they clearly upset Beijing (and their lackeys within the supposed higher echelon of Hong Kong society) so much that, say, when Xi Jinping came to town a few weeks ago, an absolutely ridiculous amount of effort was made to ensure that he didn't come across any local political protests.
In the wake of Joshua Wong, Nathan Law and Alex Chow's imprisonment for their actions leading to and during the Umbrella Movement, one of the judges which ruled on their case effectively said that the decision was meant to deter others from engaging in civil disobedience.  But rather than cow other Hong Kongers as intended, their actions look to have prompted even more people than before into defiance and to go march on the streets!
More specifically, this afternoon's march to express solidarity with what is now the youngest group of political prisoners in the world looks to have been the largest protest in Hong Kong since those that were triggered by the Hong Kong police using tear gas on unarmed and peaceful protesters at Admiralty on September 28th, 2014.  And seeing the tens of thousands who turned up today, many holding (yellow) umbrellas in their hands, I got to feeling more than ever that the Umbrella Movement is (still) alive and there is a lot of fight left in many Hong Kongers after all!
Posted by YTSL at 11:54 PM