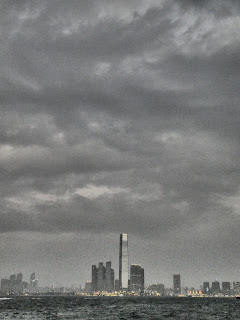 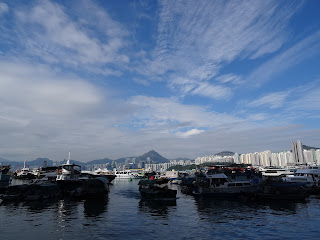 The value of typhoon shelters are not as obvious on gorgeous days
but every once in a while, a typhoon comes along to remind you
why they exist in this part of the world


Coming along just four days after Typhoon Hato hit town, Severe Tropical Storm Pakhar has made it so that the Hong Kong Observatory has now raised a typhoon warning signal of 8 or above as many times already this year as it did for the whole of 2016.  And if we take last year as a guide, we've got some two months of the typhoon season to go!


Compared to Hato, Pakhar was somewhat weakling and definitely less of a media star as I've not seen any videos of it wreaking havoc going viral the way that was the case for Wednesday's typhoon.  This didn't mean, however, that this severe tropical storm wasn't dangerous; with reports of Pakhar being responsible for at least one fatality (after a light truck overturned while travelling on a highway and throwing its driver out of the vehicle while Typhoon Signal Number 8 was raised) in addition to delays of 471 flights and cancellations of another 206 at Hong Kong International Airport.

Also, weird as it may seem, after seeing the video of cockroaches fleeing Typhoon Hato, I wonder whether it's purely coincidental that a whole bunch of ants decided to crawl into my kitchen last night (before the deluge even began) and through much of today (which really has been very wet as well as gloomily gray)?  This especially so since I spotted just one or two about the last time I looked (about one minute ago -- admittedly post a few frenzied bouts of cleaning but, for the record, typhoon warning signal one just happened to have been cancelled a little bit more than half an hour or so ago); and I hadn't noticed any ants crawling about in this apartment that I moved into last October until yesterday!
Posted by YTSL at 10:59 PM