Sleeping in public in Hong Kong, and Japan! 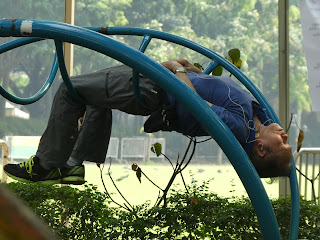 Not the usual way exercise equipment gets used! :O 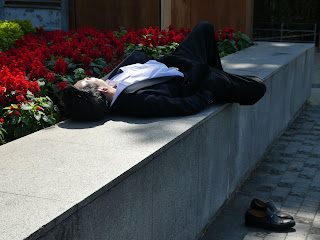 A surprisingly nattily-attired public napper!
Some years ago, on my mother's very first trip to Japan, I took her to Tokyo's Ueno Park and also tried to get her to visit two museums in the area that afternoon.  While she seemed to enjoy our visit to the Shitamachi Museum, she baulked at paying the price of admission for the National Museum of Western Art when she saw how much it was as a result of there being a special exhibition on at the time.  As she put it, "that's more expensive than eating sushi in Japan!"
Unwilling to deny me the pleasure of checking out the works of art there, she told me to go ahead and spend time in that famous museological institution, and assured me that she'd be able to find things to do in the park for a couple of hours.  Assuming that she'd be strolling about admiring the flowers and fauna in the park while I admired the paintings, sculptures and such in the museum, I was horrified to view -- fortunately, in retrospect, near the end of my tour of the exhibits -- through a large glass window of that institution my mother seemingly fast asleep on a park bench visible for all the world (or, at least, the museum's visitors as well as passers-by) to see!
Upon rushing out of the museum and up to her, my mother calmly informed me that she had been having a nice nap in the park.  When I protested that she could have easily been mistaken for a homeless person and carted away by the police, she brushed aside my remarks with a certainty that no one would mistake her for a homeless person.
And you know what?  The more I've seen both homeless people and others who have thought nothing of taking a nap outdoors in a public space -- the latter of which, I've come to discover, is quite a common occurence in Japan and Hong Kong -- the more I get to realizing that she really was right!
In all these years though, it's interesting that I've yet to see a female who's not homeless sleeping outdoors in a public space.  To be sure, I've seen many women (as well as men) dozing and even absolutely fast asleep in buses and trains in both the Land of the Rising Sun and the Big Lychee.  But my mother truly remains the only woman to date that I've seen napping contentedly on such as a park bench -- and admittedly making far less of a striking spectacle of herself as the relaxed man in the picture at top of this blog post! ;b
Posted by YTSL at 11:22 PM